Originally commissioned and presented on BBC Radio 3 between 1981 and1990, the production will mark the first revival of Barnes monologues in thirty years.

Barnes’ People will be available to stream online for five months from 18 February 2021 until 31 July 2021. Each play is approximately 20 minutes long and is suitable for all ages. Tickets may be purchased for individual monologues (£10 each) or a discounted rate for all four pieces (£35). An early bird discount rate is also available.

Filmed at Theatre Royal Windsor, the four monologues focus on the intimacies of human life and are listed below.

Marley and Me: Spitting Image and Dead Ringers actor and comedian Jon Culshaw plays a ventriloquist who attempts to control the voices in his head by letting his right-hand man take control.

Losing Myself: Matthew Kelly (Big, The Dresser, The Habit of Art) plays a man who had the world at his feet but has now lost his faith. With poignancy and profundity he sits in a solitary churchyard and must come to terms with who he has become and where he is going, but it’s going to rain and the bulldozers are moving in.

True Born Englishman: Adrian Scarborough plays a 30 year veteran footman of Her Majesty, Queen Elizabeth II; keeper of secrets and master of discretion, this behind the scenes look at Buckingham Palace was originally banned by the BBC.

Co-producer David Morley of Perfectly Normal Productions said of the the monologues, “All our monologues are from Peter Barnes’s work commissioned by BBC Radio 3.  Rosa is from a series called Barnes’ People, broadcast in 1981 and was originally performed by Judi Dench.  Losing Myself and Billy And Me were from a second series on BBC Radio 3, called More Barnes’ People.  These aired between 1989 and 1990.  Jeremy Irons was in Losing Myself and Alan Rickman played Jennings in Billy And Me.  The controversial play in our four is A True Born Englishman.  This was commissioned by BBC Radio 3 as part of More Barnes’ People.  It was cast with Antony Sher in the role and scheduled, but when the production team referred the script to higher management, they decided not to go ahead.  Peter Barnes described this as ‘banning’ the play, because of its Royal Family theme, which the BBC denied.”

Director Philip Franks added, “Peter Barnes’ monologues have all the qualities of his plays— all the passion, wit, anger and compassion- condensed into urgent 20 minute plays. They feel like they could have been written yesterday.” 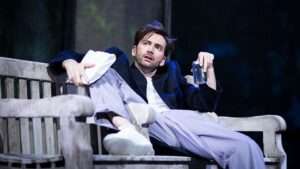