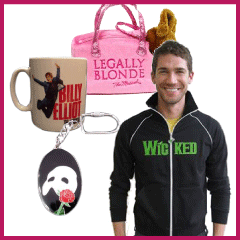 It’s not just about going to see a show – it’s all the great things you can BUY before, during and after!

So to celebrate the joy of showbiz shopping we’ve put together a wealth of the latest DVDs, soundtracks and music, books and goodies all related to West End shows.

Show merchandise includes a range of T-shirts and clothing, CDs, DVDs, books, key-rings, caps, bags and magnets for a wealth of shows – from current shows such as Wicked, Phantom, and The Lion King, to classic musicals including Joseph, Evita, Billy Elliot and Funny Girl.

Books on Amazon: Musicals and Theatre