Skip to content
Piccadilly Theatre, London
Booking to 8 June 2013
Sorry, this show is not currently booking.

Viva Forever! is the brand new musical at the Piccadilly Theatre featuring the music of the Spice Girls.

Featuring 16 of the Spice Girls’ greatest hits, the team behind the worldwide smash-hit musical Mamma Mia! have produced the show, written by Ab Fab’s Jennifer Saunders.

Viva Forever! follows the highs and lows of a mother and daughter as they work their way through a TV reality singing contest, the show is set against the unforgettable songs of the world’s greatest ever girl band, including Spice Girls hits Wannabe, Say You’ll Be There, Mama, Stop and of course the title song, Viva Forever. 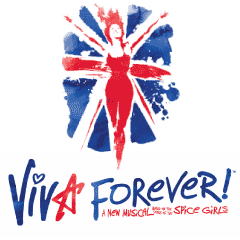 Viva Forever! to close at the Piccadilly Theatre
Viva Forever!, the musical based on the music of the Spice Girls, has posted closing notices at the Piccadilly Theatre in London. Judy Craymer, the producer of Viva Forever!, has announced that the show is to close at the Piccadilly Theatre on  29 June, 2013. The musical opened six months ago in December 2012. [caption id="" align="alignright" width="240"] Viva Forever! to close at the Piccadilly[/caption] In a particularly honest press statement Craymer, who is also the producer of Mamma Mia! at the Novello Theatre, said that it was with, "a heavy heart that we’ve had to make this very difficult decision to post closing notices". The show opened with mixed reviews from critics, and has undergone a number of changes to make it lighter and funnier, but that, "despite the wonderful audiences and extremely positive feedback we just can’t make it work", she said. Craymer went on to say that, "I'm so proud of everyone involved in this production. Viva Forever! may be taking it’s leave for now in the West End but the legacy of Spice Girls will never fade.” Featuring 16 of the Spice Girls’ greatest hits, the team behind the worldwide smash-hit musical Mamma Mia! have produced the show, written by Ab Fab’s Jennifer Saunders. Viva Forever! follows the highs and lows of a mother and daughter as they work their way through a TV reality singing contest, with the show set against the songs of the Spice Girls. Directed by Paul Garrington and featuring a book by Jennifer Saunders, the cast includes Sally Ann Triplett, Hannah John-Kamen, Bill Ward, Sally Dexter, Lucy Montgomery, Simon Slater, Tamara Wall, Siobhan Athwal, Lucy Phelps and Dominique Provost-Chalkley. The musical would have faced stiff competition from a forthcoming Harry Hill penned show, X Factor - It's Time To Face The Musical!, that has the backing of Simon Cowell and will open in the West End next year. OFFER Save up to 38% on tickets to see Spice Girls musical Viva Forever! at the Piccadilly Theatre in London.
West End Eurovision acts announced
Charity TheatreMAD has announced the first acts to play this year's WEST END EUROVISION 2013. The entertainment industry charity The Make A Difference Trust has announced the first West End shows to sign-up for its annual West End Eurovision contest, to be held at the Dominion Theatre on Thursday 23 May from 11.30pm. Now in its 6th year, the show sees 10 West End shows go head-to-head in fully costumed and choreographed versions of past Eurovision Song Contest entries. Shows now signed-up to take part include Viva Forever!, Top Hat, Mamma Mia!, The Phantom of the Opera and A Chorus Line. Last year's show saw Sweeney Todd take the crown. TV astrologer and Strictly Come Dancing's Russell Grant will lead a panel of celebrity judges, and Richard Gauntlett will host. LINKS Make A Difference Trust website Book tickets VIDEO 2012 West End Eurovision trailer httpv://www.youtube.com/watch?v=jCIqW9gKozo
Marianne Elliott to Direct Viva Forever the Musical Based On the Songs of The Spice Girls
Judy Craymer's new musical, VIVA FOREVER, a modern fable of camaraderie, love and loyalty based on the songs of the Spice Girls, is to be directed by one of the most illustrious British theatre directors Marianne Elliott. In confirming the announcement, Judy said: "I am delighted that Marianne has agreed to direct VIVA FOREVER. With her theatrical aptitude for exploring strong women and their relationships and her meticulousness to detail she is absolutely the right person to direct this new musical which is all about female friendship, celebrity and fame. I’m so happy to have her on board, together with Jennifer Saunders, who has written the musical." Marianne Elliott started her career in the mid-nineties having graduated in drama from the Hull University. Her credits include work at the Royal Exchange, Royal Court, and the RSC before she joined the National Theatre as an Associate in 2006. Credits for the National Theatre include War Horse (co-directed with Tom Morris and which has just opened to much critical acclaim on Broadway), Pillars of the Community, Therese Raquin, Saint Joan, All’s Well That Ends Well, Harper Regan, Mrs Affleck and most recently with Thomas Middleton’s Woman Beware Women and Alan Ayckbourn’s Season’s Greetings. Simon Fuller, the Spice Girls' manager, said, "The girls and I are delighted that one of the most brilliant female theatre directors Marianne Elliott is to direct VIVA FOREVER. Judy, Jennifer and now Marianne, make an eminent team.” VIVA FOREVER is produced by Judy Craymer in association with Universal Music, Simon Fuller and the Spice Girls. VIVA FOREVER, a romantic comedy musical, based on the songs of the Spice Girls, is expected to open in the West End towards the end of 2012. Release issued by: Borkowski LINKS Book tickets to Viva Forever! at the Piccadilly Theatre in London