Zorro The Musical returns to the West End for a strictly limited season at Charing Cross Theatre from 2 April 2022.

Fighting for justice and freedom this red-hot and sensuous tale of the hero behind the mask is told in an immersive, thrilling and sensual new production set to the hits of the Gipsy Kings. Tickets for Zorro The Musical are now booking until 28 May 2022.

What is Zorro The Musical about?

Set in the sizzling heat of 1805’s California, a pueblo is under attack from its autocratic leader. When the danger is at its greatest, a masked crusader appears from nowhere and saves lives. Who is he? Will he be their champion?

The famous red-hot tale of the masked hero, El Zorro, fighting for justice and freedom is told in an immersive, thrilling and headily sensual new production. With zealous, ‘get-on-your-feet’ music, featuring international hits by Gipsy Kings including Bamboleo, Baila Me and Djobi Djoba, alongside original music to express a fresh new tale of love, hope and courage.

Audiences will be seduced into the story and witness the thrills and spills of our hero as he battles for all he holds dear. Spanish Gypsy pride and fire runs deep throughout this explosive show with murderous encounters, immeasurable flamenco choreography and Cante jondo singing at its forefront.

Who is in the cast ofZorro The Musical?

The show stars Benjamin Purkiss (Broken Wings, Bat Out of Hell) as Diego/Zorro, Paige Fenlon (Pretty Woman, Oklahoma!) as Luisa (pictured above), alongside Alex Gibson-Giorgio (Mamma Mia!, Anything Goes) as Ramon, and Phoebe Panaretos (Strictly Ballroom the Musical, Singing in the Rain) as Inez.

Zorro is based on the character created by American pulp fiction writerJohnston McCulley. Zorro The Musical features an original story byStephen Clark and Helen Edmundson, book & lyrics by Stephen Clark, music by The Gipsy Kings and music co-composed and adapted by John Cameron.

The production is directed by Christian Durham with choreography by Cressida Carré, set and costume design by Rosa Maggiora and musical direction and orchestrations by Nick Barstow. Sound design is by Andrew Johnson, lighting design by Matthew Haskins, fight direction by Renny Krupinski with flamenco specialist Maria Vega and accent coach Nina Zendejas. The casting director is Jane Deitch and the general manager is Chris Matanlé.

Reviews of Zorro The Musical

★★★★ "Energy, talent and excitement" - The Stage
"Benjamin Purkiss brings charm and a sweet singing voice to Diego" - i News
"Presented with flamenco flair" - The Guardian

Latecomers may be admitted at a suitable point during the performance.

News about Zorro The Musical
More > 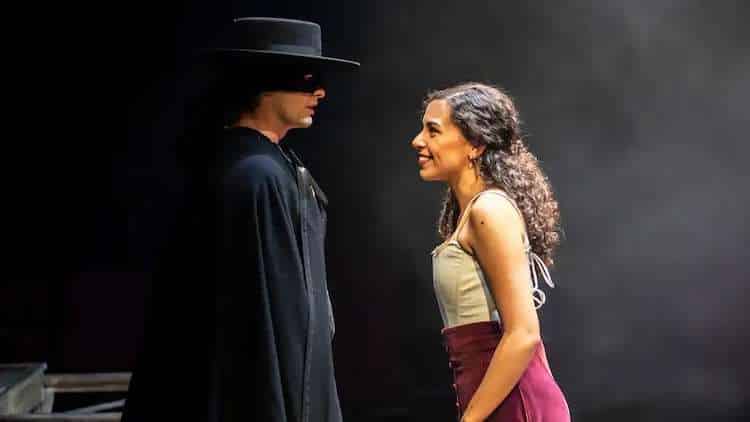 ">
Zorro The Musical – Reviews at the Charing Cross Theatre ★★★ 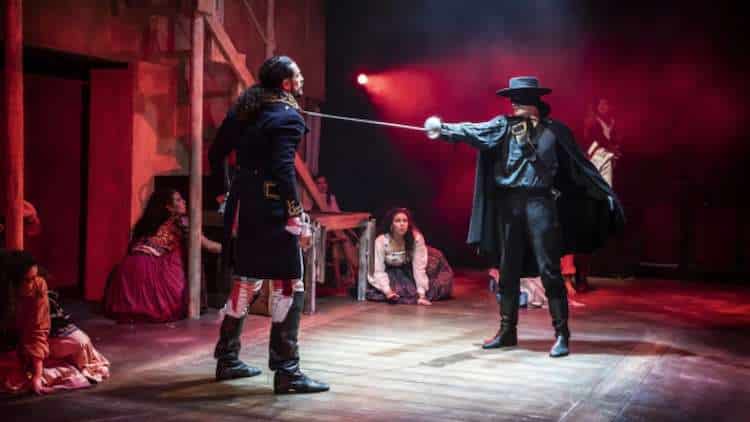