The timetable has been published for West End Live, the free annual theatre event that returns to London this weekend, Saturday 18 and Sunday 19 June 2011. 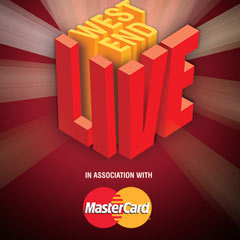 This year the event will be held in Trafalgar Square whilst renovations continue in its traditional home of Leicester Square and promises to be a spectacular celebration of West End shows.

West End musicals taking part in the weekend include Rock of Ages, Betty Blue Eyes, Ghost The Musical, The Wizard Of Oz, Million Dollar Quartet, Shrek The Musical, Lend Me A Tenor and the Open Air Theatre’s new production of Crazy For You. Also new this year will be performances from the madcap The Flying Karamazov Brothers, CBBC’s Dan and Jeff in Potted Potter and ZooNation’s Some Like It Hip Hop.

They will be joined by long-running shows including Stomp, War Horse, Legally Blonde The Musical, Love Never Dies, Mamma Mia!, The Lion King, Billy Elliot The Musical, Jersey Boys, Thriller Live, Priscilla Queen Of The Desert The Musical, Chicago, Wicked and We Will Rock You.

Stars will be out in force for the event, with performances promised by some of the West End’s top talent, including Over The Rainbow winner Danielle Hope (The Wizard of Oz), Lee Mead (Legally Blonde) and Sarah Lancashire (Betty Blue Eyes).

There will also be performances from Free Run, the West End Gospel Choir, The Gleeks and the London Gay Men’s Chorus and exhibits from the Science Museum, London Film Museum and National Gallery. 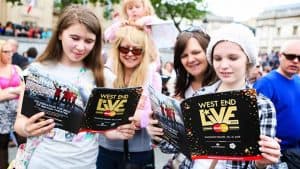 Danielle Hope cast as Snow White at the London Palladium