Buddy will open at the Theatre Royal Plymouth on 3rd September 2019, playing for 1 week, before embarking on an extensive UK tour with venues and dates to be announced.

“We are proud that Buddy will be opening its 30th Anniversary Tour back here at the Theatre Royal Plymouth in 2019. Thirty years is an incredible achievement. The show was developed and started its life at the Theatre Royal Plymouth in 1989 and so this is very much the show’s ‘spiritual home’. Plymouth audiences have always loved to rock along to this show and the anniversary will be a major celebration.”

A critic and fan favourite, Buddy tells the enduring tale of the musical icon’s meteoric rise to fame and his final legendary performance at the Surf Ballroom in Clear Lake, Iowa, before his tragic and untimely death at the age of 22.

The musical features 20 of Buddy Holly’s greatest hits, including timeless classics That’ll Be The Day, Peggy Sue, Oh Boy and Rave On.

One of the first truly successful jukebox musical, the show has inspired a wave of multi-million selling juke-box musicals including Mamma Mia, Jersey Boys, We Will Rock You, Beautiful – The Carole King Musical and current West End favourite Tina – The Tina Turner Musical

Buddy premiered at the Theatre Royal Plymouth in 1989 before transferring to London’s West End where it played 5822 performances over 728 weeks. The 14 year West End run makes Buddy the 9th longest running musical in London’s West End and joins a small number of iconic musicals including Les Miserables, Phantom of the Opera, Joseph and the Amazing Technicolour Dreamcoat, Miss Saigon, Evita and Cats in reaching a phenomenal three decades on stage.

Since leaving the West End Buddy has played a record breaking 4450 performances over 556 weeks on tour in the UK and Ireland and most recently completed a successful 6-month tour of the US & Canada. 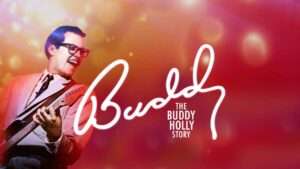