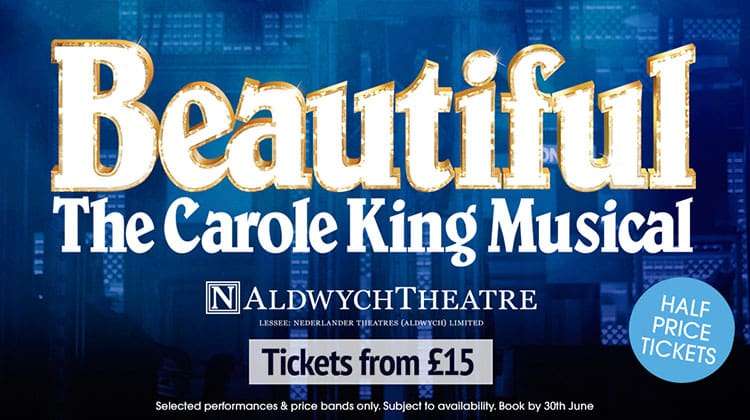 ABOUT BEAUTIFUL The Carole King Musical

BEAUTIFUL tells the inspiring true story of music legend Carole King, from a Brooklyn girl with passion and chutzpah through to her remarkable rise to stardom.

The show charts her beginnings as part of a hit songwriting team with her husband Gerry Goffin, to her relationship with fellow writers and best friends Cynthia Weil and Barry Mann, to becoming one of the most successful solo acts in popular music history.

Along the way she made more than BEAUTIFUL music, and wrote the soundtrack to a generation.

The show features an extraordinary range of her classic songs including It Might As Well Rain until September, Happy Days Are Here Again, Some Kind of Wonderful, Take Good Care of My Baby, Locomotion, Up on the Roof, (You Make Me Feel Like) A Natural Woman, Beautiful, You’ve Lost That Lovin’ Feeling, Will You Love Me Tomorrow, Be-Bop-A-Lula, You’ve Got a Friend, So Far Away, Oh Carol, 1650 Broadway Medley, Who Put the Bomp, He’s Sure the Boy I Love, On Broadway, One Fine Day, Chains, Walking in the Rain, Pleasant Valley Sunday, We Gotta Get out of This Place, Uptown, It’s Too Late and I Feel the Earth Move.

Beautiful The Carole King Musical will run until 5 August 2017 at the Aldwych Theatre.

She fought her way into the record business as a teenager and, by the time she reached her twenties, had the husband of her dreams and a flourishing career writing hits for the biggest acts in rock ‘n’ roll.

But it wasn’t until her personal life began to crack that she finally managed to find her true voice.

Why book BEAUTIFUL The Carole King Musical tickets with us?