Matt Willis of Busted stars in Flashdance The Musical 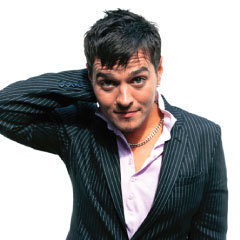 Matt Willis may be best known for singing in boyband Busted and winning the 2006 series of I’m A Celebrity… but he’s about to forge a whole new career.

He’s no stranger to acting though, having trained at Sylvia Young’s drama school as a child and winning parts in TV dramas The Bill, Casualty and EastEnders.

But getting a place in boyband Busted took his career in a whole new direction, and he toured the world with the band and then forged a solo career, releasing the singles Up All Night, Hey Kid and Don’t Let It Go to Waste as well as a cover version of The Primitives’ song Crash for the feature film Mr Bean’s Holiday.

However, getting back to acting has remained an ambition for Willis and with his starring role in Flashdance The Musical, alongside up-and-coming actress Victoria Hamilton Barritt, he will be hoping it’s the beginning of a big new chapter.