Skip to content
Vaudeville Theatre, London
Booking to 22 June 2013
Sorry, this show is not currently booking.

The West End Men is a sharp and sexy concert that brings together some of London theatre’s hottest and most talented male stars in a night celebrating the greatest musical numbers from the biggest shows.

From acclaimed director Mitch Sebastian, the show features a wealth of West End and Broadway showstoppers, backed by a live band and choir. And joining the boys will be West End superstar Kerry Ellis* (Wicked, Oliver, We Will Rock You) in this intimate production running for only four weeks at the Vaudeville Theatre. 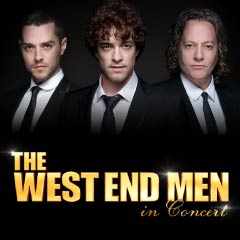