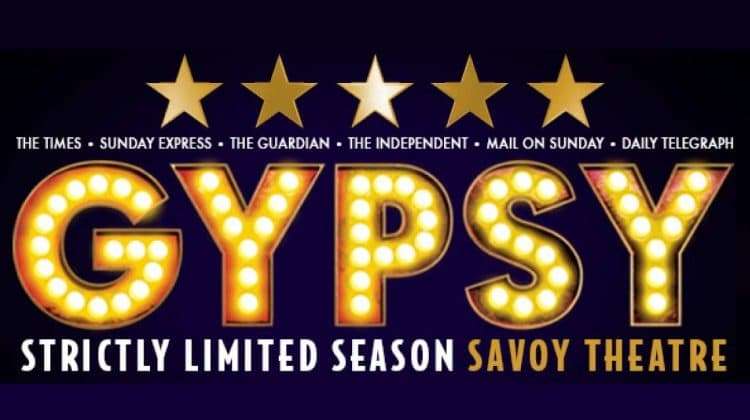 Following a wildly successful five-star run at the Chichester Festival Theatre, GYPSY gets a much-deserved transfer to the West End’s Savoy Theatre, from 28 March 2015.

Starring Imelda Staunton as legendary stage mother from hell Mama Rose, Staunton puts in a triumphant, career-defining performance as she teams up again with director Jonathan Kent following their award-winning 2013 production of Sweeney Todd.  Joining Imelda Staunton are Lara Pulver who will reprise the role of Louise and Peter Davison who joins the cast to play Herbie.

Based on the memoirs of legendary American burlesque entertainer and famous stripper Gypsy Rose Lee, GYPSY features lyrics by Stephen Sondheim, music by Jule Styne and a book by Arthur Laurents.

Gypsy is considered to be one of the greatest Broadway musicals of all time and features a show-stopping score of musical classics including Let Me Entertain You, Rose’s Turn and Everything’s Coming Up Roses.

This stellar, enormously entertaining production is set to be one of the great West End musical revivals of the decade.

Gypsy is directed by Jonathan Kent with choreography by Stephen Mear, design by Anthony Ward, musical direction by Nicholas Skilbeck, lighting by Mark Henderson, and sound by Paul Groothuis.

Rose Hovick (Imelda Staunton) has big plans for her two little daughters. Baby June is the innocent star of her show, and as they hoof their way across the musical halls of America Momma Rose plans to keep her innocent! But as the years go by the times they are are a changing, and June is getting all grown up. When teenage June dramatically quits the show, a desperate Rose turns her fierce attention to her other, shyer daughter, Louise. But Louise has spent a lifetime in her sister’s shadow and doesn’t match her mother’s ambition, or fit into the tired old routine. As the lights start fading on the cheery family acts of vaudeville, to be replaced by the riskier attractions of burlesque, audiences expect to see much more of their stars than ever before…

★★★★★ “Jonathan Kent’s exemplary revival of Gypsy is nothing less than a triumph for Imelda Staunton.” Daily Telegraph

★★★★★ “Staunton’s strength of determination makes this quite possibly the most exciting thing I have seen on a stage. A truly great performance in a truly great show.” The Times

★★★★★ “Everything about Kent’s production slots perfectly into place.” The Guardian

Why book Gypsy tickets with us?