Skip to content
The Old Vic, London
Booking to 22 February 2014
Sorry, this show is not currently booking.

The RSC’s William Houston and Richard McCabe (The Audience) star in Turgenev’s comic play Fortune’s Fool at the Old Vic Theatre (until 22 February 2013).

Directed by Lucy Bailey, this brand new production of Turgenev’s oft forgotten classic, which makes its West End debut at the Old Vic, is an adaptation by Mike Poulton with design by William Dudley.

A pair of newlyweds arrive at their country estate to be welcomed by Kuzovkin (William Houston), the penniless gentleman-in-residence. Their wealthy and mischievous neighbour Tropatchov (Richard McCabe) calls by for a seemingly innocent celebratory lunch. Fuelled by champagne, the proceedings degenerate leading to a shocking revelation with far-reaching consequences.

Fortune’s Fool was last produced on Broadway in 2002 with Alan Bates and Frank Langella, both winning Tony Awards.

CASTING UPDATE: Due to illness, Iain Glen has had to withdraw from the production in the role of Kuzovkin and is replaced for the rest of the run by William Houston. 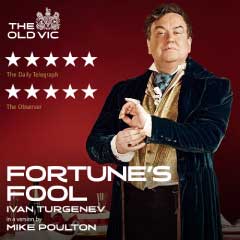