Skip to content
Garrick Theatre, London
Booking to 1 March 2014
Sorry, this show is not currently booking.

12 Angry Men by Reginald Rose is directed by Christopher Haydon and produced by Bill Kenwright.

The play centres on the deliberations of a jury of twelve men during a homicide trial as they consider whether a young man murdered his father in cold blood. They start with a near unanimous verdict of guilty in a case that clearly seems open and shut. But one single dissenter sows a seed of reasonable doubt and plants this in the minds of the rest of the jury as the play builds to a nail-biting climax.

★★★★ “REGINALD ROSE’S CRACKING COURTROOM DRAMA HAS TO BE THE CLASSIEST MOST INTELLIGENT NOW PLAYING IN THE WEST END” Sunday Telegraph
★★★★ “THE TERRIFIC ENSEMBLE CAST ARE DYNAMIC AND DISTINCT” The Times
★★★★ “PERFECTION… EXQUISITELY DESIGNED… LIVES IN THE MIND LONG AFTER THE FINAL CURTAIN CALL” Daily Telegraph
★★★★ “AS POWERFULLY RIVETING AS EVER… IT IS BOTH GRIPPING AND MOVING” Financial Times
★★★★ “IT’S A TRIUMPH” Daily Mail
★★★★ “ELECTRIC. INCISIVE AND SLICK – A FINE SPECTACLE” Daily Mail
★★★★ “THIS GRIPPING MEDITATION REMAINS THE CLASSIC EXPRESSION OF LIBERAL HUMANITY” Daily Express 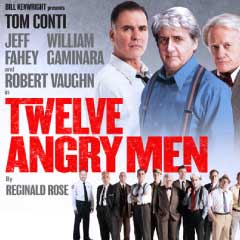