Michael Xavier stars as Captain Von Trapp in The Sound of Music at the Open Air Theatre. 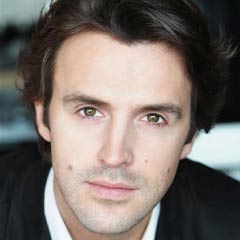 Michael Xavier returns to the Open Air Theatre this summer following his Olivier nominated performance in Into The Woods in 2010.

Michael has forged an accomplished musicals career since graduating from Manchester Metropolitan University.

2012 was a busy one for the actor as he starred in Hello Dolly! at the Leicester Curve with Janie Dee, in Soho Cinders at the Soho Theatre, Wonderful Town at the Royal Exchange and appeared as Daniel Cleaver in a workshop production of  Bridget Jones The Musical.

He played jock Oliver Barrett in Love Story at the Chichester Festival Theatre and in the West End in 2011, for which he was nominated for an Olivier Award.

Other roles include Curly in Oklahoma at Chichester, Sir Galahad in Spamalot at the Palace Theatre, Raoul in Phantom of the Opera, Freddy in My Fair Lady at the Theatre Royal Drury Lane and Sky in Mamma Mia in the UK on tour.

Michael Xavier stars alongside Charlotte Wakefield as Maria Rainer in The Sound of Music.

Date: 17 May 2013
Written by: WestEndTheatre
Tags: Michael Xavier, The Sound of Music