Skip to content
The Old Vic, London
Booking to 31 August 2013
Sorry, this show is not currently booking.

Fleeing the disastrous premiere of her comeback film, Alexandra Del Lago [Cattrall] travels incognito as The Princess Kosmonopolis seeking refuge in drink, drugs and the arms of Chance Wayne, an idealistic young dreamer turned gigolo and hellbent on achieving his own movie stardom.  A trip to Chance’s hometown in a bid to win back his childhood sweetheart sees their relationship of convenience unravel in Williams’s vivid and haunting portrait of the destruction of dreams. 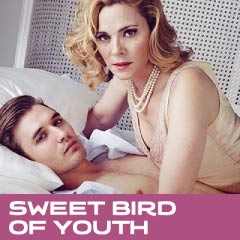