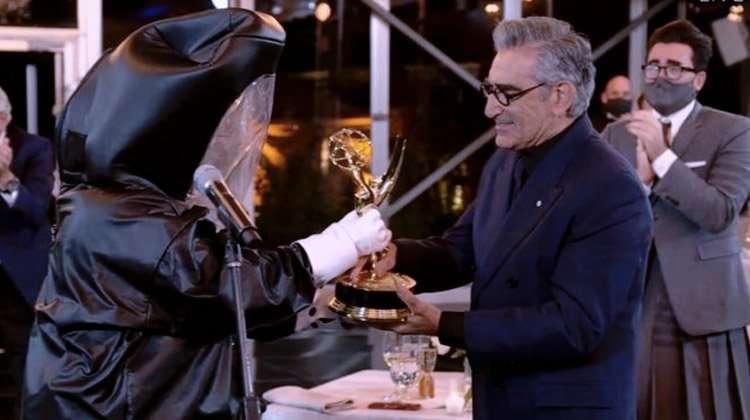 Schitt’s Creek, Succession and Watchmen were the big winners at the 72nd Emmy Awards held on Sunday 20 September 2020 at a virtual ceremony hosted by comedian and late-night talk show host Jimmy Kimmel.

In what is now being referred to as the Pand-Emmy’s, fan favourite Schitt’s Creek picked up 9 Emmy’s including Outstanding Comedy- breaking the Emmy’s record for most wins in a single season for a comedy – a fitting send-off for its sixth and final season.

O’Hara won for lead actress in a comedy for her portrayal of Moira Rose, in her second nomination for the much-loved series with Eugene Levy taking home the Emmy for lead actor in a comedy series for his portrayal as straight laced family patriarch Johnny Rose.

In accepting her award O’Hara called out Schitt’s Creek creators Eugene and Dan Levy, as well as costume designer Debra Hanson and makeup artist Lucky Bromhead. “I’ll forever be grateful to Eugene and Daniel Levy for giving me the opportunity to play a woman of a certai age, my age, who gets to be full her ridiculous self” she continued ” they gathered the most beautiful, fun-loving people in Toronto, cast and crew, and then, by example, led us to be the best we can be for each other.”

Eugene Levy joked that the role which had won him TV’s top acting award for comedy was the most straight role he had ever played. “I guess it’s kind of ironic that the straightest role I ever played lands me an Emmy for a comedy performance. So now I seriously have to question just what I’ve bee doing for the past 50-years.”

Dan Levy said “Our show, at its core, is about the transformational effects of love and acceptance, and that is something we need more of now than we’ve ever needed before”.

HBO’s premier show Succession took home the night’s top prize, Outstanding Drama Series, as well as Lead Actor in a Drama Series for Jeremy Strong. The machiavellian show about a media magnate and his family, often said to be inspired by Rupert Murdoch, also won prizes for best writing and best directing in a drama series. The show’s British creator Jesse Armstrong said from London. “This is such a very nice moment. But it’s sad not to be with the cast and crew to share it.”

HBO’s other big show Watchmen, an innovative reimagining of a superhero graphic novel that tackled racism in America, scored the most nominations (26) and wins (11) this year. The show won Outstanding Limited Series, best Actress in a Limited Series for Regina King, Supporting Actor for Yahya Abdul-Mateen II and writing for Damon Lindelof (Lost) and Cord Jefferson (The Good Place).

As she was presented her Emmy at home King joked “This is freakin’ weird”. In her acceptance speech, she paid tribute to US Supreme Court Justice Ruth Bader Ginsburg, who died over the weekend, and encouraged viewers to register vote in the forthcoming presidential election.

Kimmel’s third time hosting the ceremony was a rather low key event as it played to an empty auditorium with card board cut-outs of the nominees and a majority of the nominees phoning in from home. To ensure that winners received their Emmy in real-time each nominee was sent an identical box with the winner’s containing the Emmy which would pop open at the right time. In addition, the cast of Schitt’s Creek who were at a special covid-19 secure venue in Canada were handed their Emmy’s via a person in a hazchem suit.

The Creative Arts Emmys took place earlier this week, with winners announced in categories such as casting, hair, make-up, lighting and sound design.

Supporting actress in a drama series

Supporting actor in a drama series

Directing for a drama series

Mark Mylod (Succession, “This Is Not for Tears”)

Writing for a drama series

Jesse Armstrong (Succession, “This Is Not for Tears”) – WINNER

Lead actress in a drama series

Lead actor in a drama series

Sterling K Brown (This Is Us)

Supporting actor in a limited series or TV movie

Directing for a limited series

Stephen Williams (Watchmen, “This Extraordinary Being”)

Writing for a limited series

Damon Lindelof and Cord Jefferson (Watchmen, “This Extraordinary Being”) – WINNER

Actor in a limited series

Mark Ruffalo (I Know This Much Is True) – WINNER

Actress in a limited series

Octavia Spencer (Self Made)

The Late Show with Stephen Colbert

The Daily Show with Trevor Noah

What We Do In The Shadows

Supporting actress in a comedy series

Supporting actor in a comedy series

Directing for a comedy series

Matt Shakman (The Great, “The Great”)

Writing for a comedy series

Sam Johnson and Chris Marcil (What We Do in the Shadows, “Collaboration”)

Tony McNamara (The Great, “The Great”)

Stefani Robinson (What We Do in the Shadows, “On the Run”)

Paul Simms, (What We Do in the Shadows, “Ghosts”)

Lead actor in a comedy series

Lead actress in a comedy

Christina Applegate (Dead to Me)

Linda Cardellini (Dead to Me)

Guest actor in a comedy series

Guest actress in a comedy series

Guest actor in a drama series

Ron Cephas Jones (This Is Us) – WINNER

Guest actress in a drama series

Cicely Tyson (How To Get Away With Murder)

Phylicia Rashad (This Is Us)