The World Premiere of Broken Wings at the Theatre Royal Haymarket

Broken Wings receives its World Premiere at the Theatre Royal Haymarket this Summer.

Fist released as a concept album, Broken Wings is an autobiographical tale of tragic love based on Lebanese-born poet Kahlil Gibran’s 1912 masterpiece.

Co-Writer Nadim Naaman leads the cast as the iconic Gibran, the show’s narrator, with Rob Houchen (Les Misérables, Titanic, Eugenius! The Musical) as Gibran’s teenage self.

New York City, 1923. An ageing Gibran narrates from his cold studio. Through poetry and music, he transports us back two decades and across continents, to turn-of-the-century Beirut.

After five years in America, 18 year old Gibran returns to The Middle East to complete his education and discover his heritage. Falling deeply in love with the daughter of a family friend, she is soon betrothed to the nephew of a powerful bishop who has one eye on her family fortune. The two must fight to reconcile their love for one another, whilst navigating the rules, traditions and expectations that their society lays before them.

Book Music & Lyrics by West End star Nadim Naaman (“The Phantom of the Opera”) and Music and Lyrics by Dana Al Fardan, one of the Middle East’s leading contemporary composers. Broken Wings is directed by Bronagh Lagan, with orchestrations by Joe Davison

Why book Broken Wings tickets with us? 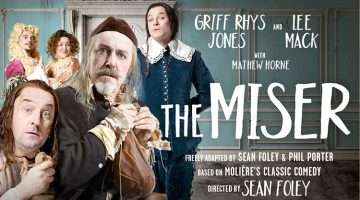 The Miser at the Garrick Theatre