The Moderate Soprano at the Duke of York’s Theatre

Few people know the extraordinary story of how an eccentric English schoolmaster bumped into three refugees from Hitler’s Germany and formed one of the world’s great opera houses.

David Hare’s acclaimed new play on the origin of Glyndebourne comes to London’s Duke of York’s Theatre in Spring 2018.

The two great passions in John Christie’s life were opera and a beautiful young soprano, Audrey Mildmay, with whom he was completely smitten.

Together with his formidable drive, they fuelled what many first saw as a monumental folly in the South Downs.

WHO’S IN IT: THE MODERATE SOPRANO CAST

The cast is led by Roger Allam (La Cage Aux Folles, Money) and Nancy Carroll (After the Dance, Call The Midwife).

Written by David Hare, directed by Jeremy Herrin with design by Bob Crowley.

News about The Moderate Soprano
More >

">
In Pictures: The Moderate Soprano 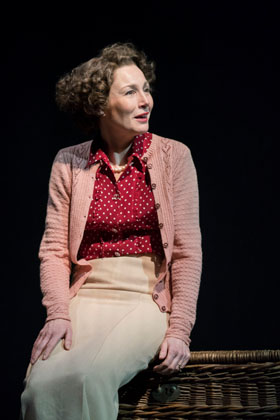 ">
The Moderate Soprano – review round up

A review round-up for The Moderate Soprano

David Hare’s The Moderate Soprano opens to mixed reviews at the Duke of York’s Theatre in London.

Few people know the extraordinary story of how an eccentric English schoolmaster bumped into three refugees from Hitler’s Germany and formed one of the world’s great opera houses. The two great passions in John Christie’s life were opera and a beautiful young soprano, Audrey Mildmay, with whom he was completely smitten.

Directed by Jeremy Herrin (People, Places and Things), David Hare’s play is described as ‘richly funny’ to ‘mild and flavourless’, but all agree on Roger Allam and Nancy Carroll’s wonderful performances.

“This is a rich, funny, touching play about the opera house and the extraordinary marriage of its co-founders, John Christie and Audrey Mildmay.”

“Hare has written an unusual play for this day and age: one that celebrates both love and a supposedly elitist art form. One of the high points of Roger Allam’s superb performance as Christie comes when he defends the practical difficulties, as well as the high costs, of getting to Glyndebourne on the grounds of the artistic enrichment offered. To some, the experience is simply “snobs on the lawn”, but when Christie says “we’re talking about the sublime” Allam’s voice vibrates with passion.”

“Nancy Carroll is every bit as impressive as Audrey. She shows the tension between her role as gracious Sussex chatelaine and understandably ambitious artist, and perfectly captures the ravaged intensity of Audrey’s final years.

Jeremy Herrin’s direction, meanwhile, does justice to an enlightening play that, like much of Hare’s work, is full of an alert romanticism.

“The artistic directorship of Bayreuth in return for ridding the company of Jews – reflects the extent to which the play favours exposition over tension.”

“Allam and Nancy Carroll are first class as Christie and his wife: he full of bluster, brawn and passion; she sensible, charming and forced to accept she can expect no favouritism from the Germans.

Hare clearly sees in Glyndebourne a symbol of a niche but enduring well-heeled Englishness and he’s absolutely right, but there’s no getting round the fact he’s written far better plays about England than this.”

“Hare’s very English story of these Glyndebourne oddballs lives up to its name.

This play captures a certain part of England to a tee, or should that be tea, as in Earl Grey and from Fortnum’s too.”

Elegantly directed by Jeremy Herrin – teases it out over a leisurely, charming, well-made evening.

Hare’s play is a green and pleasant window into high-cultural life in the 1930s and beyond. It’s brought to life by pitch-perfect acting, especially from Roger Allam.

Like Glyndebourne, it’s a night that’s not exactly dripping in mass appeal. But anyone who’s interested in music, Englishness or an intelligent evening at the theatre will happily stay for the curtain call.”