This iconic musical comedy about life, love and marriage stars Rosalie Craig in the role of ‘Bobby’ – re-imagined for the first time as a woman –  alongside Two-time Grammy, Tony and Olivier award-winning Broadway icon Patti Lupone as ‘Joanne’ and Mel Giedroyc as ‘Sarah’.

At Bobbi’s 35th birthday party all her friends are wondering why isn’t she married? Why can’t she find the right man? Why doesn’t she settle down and have a family? One thing is for certain; you will fall in love with Company.

WHO’S IN IT? COMPANY CAST

Music and lyrics by Stephen Sondheim with book by George Furth. Directed by Marianne Elliot with set and costume design by Bunnie Christie.

★★★★★ “In short, it’s glorious.” Evening Standard
★★★★★ ‘It’s sensational. Sondheim proves a sublime down-the-rabbit-hole cocktail of entertainment’ Telegraph
★★★★★ “Entertaining as hell. This production deserves to go down as a game-changer“ TimeOut

Reviews are in for Company at the Gielgud Theatre in London.

Broadway legend Patti Lupone ‘steals the show’ according to Paul Taylor from the Independent as she downs another vodka stinger in the role of Joanne, with Mel Giedroyc (Mel & Sue, GBBO) putting her comic-passive-aggressive jujitsu skills to the test as Sarah and rising star Jonathan Bailey (W1A, Broadchurch, King Lear) singing one of toughest songs in showbiz ‘Getting Married Today’.

Ingenious, eye-popping design is by the award-winning Bunny Christie, with lighting by Neil Austin and inventive choreography by Liam Steel. 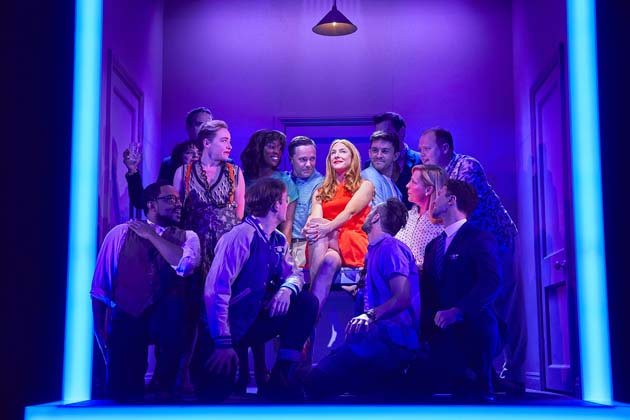 Patti Lupone and Andrew Lloyd Webber have ended one of Broadway’s longest running and most enjoyed feuds.

Eyebrows were raised when it was announced Lupone would perform in a tribute to Lloyd Webber and Leonard Bernstein at this years Grammy Awards.

Having agreed to perform “Don’t Cry for Me, Argentina” the necessary re-scoring for the televised awards ceremony required the dueling divas to work together.

Meeting Lloyd Webber in New York for rehearsal, Lupone picked up the microphone and announced to the room full of people (who had nervously been wondering how it would play out) “This is détente, ladies and gentlemen” followed by a hug with the celebrated composer.

The two famously fell out over his decision to fire her from the Broadway production of Sunset Boulevard 24 years prior and replace her with Glenn Close, who subsequently won the Tony Award.

Lupone sued and walked away with a million dollars which she used to install a luxurious swimming pool in her Connecticut home.

Lupone’s performance at the Grammy’s has been widely acclaimed and become a hit on youtube.

Broadway star Patti Lupone has signed on for the London production of Company.

Lupone will play the role of ‘Joanne’ in her first full scale production of Sondheim’s Tony Award winning musical. She has previously appeared in concert productions of Company and her rendition of ‘Ladies Who Lunch’ is a youtube sensation.

Patti LuPone said: ‘I saw War Horse in New York and The Curious Incident of the Dog in the Night-Time in London. I came out of both productions blown away by Ms Elliott’s vision. So naturally I am thrilled beyond words that she wants me to be a part of Company.

“I thought I’d sworn off musicals, but working with Marianne was an opportunity I couldn’t resist.”

Lupone is currently starring with Christine Ebersole in the soon to close Broadway production of War Paint.

British actress Rosalie Craig will play the lead role of “Bobby” re-imagined for the first time as a woman.

Stephen Sondheim and George Furth’s musical about life, love and marriage is directed by Marianne Elliott (War Horse, The Curious Incident of the Dog in the Night-Time) with set and costume by Bunny Christie.

The musical centres on Bobbi’s 35th birthday party, where surrounded by all her friends, they wonder why she can’t find the right man, settle down and get married.

The musical masterpiece opens in September 2018 at the Gielgud Theatre.