Donmar Warehouse have announced their exciting Autumn season, highlights include two new productions: a revival of David Harrower’s modern classic, Knives in Hens, and Ibsen’s masterpiece, The Lady from the Sea.

Artistic Director Josie Rourke said “The Donmar will once again be home to stories both epic and intimate. This autumn I am delighted to bring you two exceptional plays, celebrating world-class theatre making talent.”

Farber brings her own distinctive style to the play that stars Christian Cooke (BBC series Doctor Who), Judith Roddy (The Plough and The Stars, National) and Matt Ryan (Hamlet, Wyndham’s/Broadway; Henry V, Broadway).

Kwame Kwei-Armah follows up his acclaimed production of One Night In Miami.. with a new adaptation from Elinor Cook of Henrik Ibsen’s The Lady from the Sea.

The season also includes Becoming: Part One, a series of workshop performances written and performed by Rosalie Craig and Michelle Terry performed at the Donmar’s rehearsal space. Both share their very personal experiences of giving birth six months ago, remembering now because they are already starting to forget.

Tags: Donmar Warehouse, Knives in Hens, The Lady from the Sea 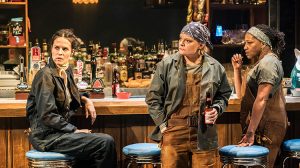