Reviews round-up: One Night In Miami… at Donmar Warehouse

Did it knock the critics out? 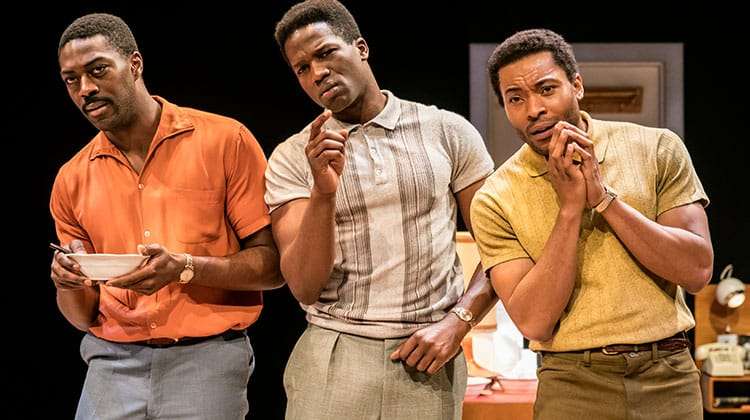 A reviews round-up of Kwame Kwei-Armah’s One Night In Miami… at the Donmar Warehouse.

Here’s a round-up of reviews from The Guardian, Time Out, Evening Standard and The Stage.

“‘One Night in Miami… is a parable about a crucial time in US history, when black Americans were becoming the world’s biggest celebrities just as the African-American civil rights movement was finally getting somewhere.”

“At first, it seems to be all about Sope Dirisu’s wonderfully Tiggerish Cassius Clay, who bounds into the room all fired up, endearingly in love with himself as he excitedly relives his epochal fight with Sonny Liston. But Powers and director Kwame Kwei-Armah (his first UK production in yonks) allow Clay’s bluster to fade after a while. In a finely balanced production. David Ajala is hugely likeable as the socially conscious but pragmatic Brown, while Arinzé Kene is spectacular as the incandescently talented Cooke (he sings, really bloody well).”

“But this night really belongs to US actor Francois Battiste, superb as Malcolm X. The odd man out in the room, his icy presence is awkward and discomfiting; his dry, urbane tones slice through the younger men’s enthusiasm like a knife. He manipulates them all: Clay is in awe of him, Cooke is belittled by him.”

“As a piece of writing ‘One Night in Miami…’ is middleweight, not heavyweight, but the cast are an absolute knockout, and it gains extra muscle in the age of Black Lives Matter.”

“This is a snap of black America rather than an analysis. Three very physical performers; one mental jouster. As Malcolm X, François Battiste is precise, clerk-like. Set apart by his spruceness, devoutness, and the lightness of his skin, he hardly gestures, but under stress his cheeks shudder. He needles his companions, trying to rouse them into explicit political commitment, but his own dilemma is completely opaque, entirely unexamined.”

“Sope Dirisu’s Clay (sweetly pleased at being pretty) bounces across the stage as if he were in the ring. David Ajala’s Brown is exemplary: a beacon of intelligence as well as physical achievement. And Arinzé Kene’s Cooke sings. The most intensely particular parts of the evening come when he recreates moments from his concerts.”

“Powers’ writing is soulful and, with its sharply topical interest in the politics of race, this 90-minute piece packs a substantial punch.”

“Powers’ play is not structurally adventurous. The men conveniently vacate the room at regular intervals to allow other conversations to take place, and it often feels as if they’re explaining things to each other they would already know.”

“Kwame Kwei-Armah’s production can also feel static at times, but he’s assembled a charismatic and engaging cast who successfully humanise these mythic individuals. There are some seriously sweet moments too, particularly when Arinze Kene’s Cooke serenades the audience with You Send Me.”

“While Powers hints at these men’s flaws – particularly in regard to their absent wives – it’s a play about men whose stories matter because the things they hoped for have not yet come to pass, because two of them would die in violence and that still happens all too often, because many people’s heroes still don’t appear on stamps, because plays with all-black casts are still rare (particularly in the UK), and because sometimes the teller is equally as important as the telling.”