A reviews round-up for new rock musical Murder Ballad at the Arts Theatre.

Conceived by Rent composer Jonathan Larson and written by the award-winning Julia Jordan with music and lyrics by singer-songwriter Juliana Nash, Murder Ballad is billed as a ‘thrilling new musical of love, obsession and murderous desire’.

Here’s a round-up of reviews from The Guardian, Time Out, Evening Standard and The Stage.

"A clever chamber rock musical which has plenty of sharp wit and the driving force of a noir thriller. Sam Yates’s staging boasts a quartet of spot-on performances."

"It’s a pity that this isn’t staged in a more intimate space, which would bring the audience into the heart of the action and implicate us more."

"There’s not much murder and nary a ballad in ‘Murder Ballad’, a new sung-through musical with sexy aspirations befitting its soft-rock score."

"Julia Jordan and Juliana Nash’s musical is barely exciting enough to fill an episode of ‘EastEnders’, let alone a 90-minute stage show. Fortunately the superb cast carries it – all four of them have captivating singing voices and do a great job of keeping the rock vocals in check, only dialling it up to eleven for a choice chorus or two."

"Kerry Ellis is unsurprisingly excellent; the woman who took over from Idina Menzel in ‘Wicked’ has quite the way with cramming subtlety and emotion into even the most enormous vocal parts. But it’s Victoria Hamilton-Barritt who really nails it. She brings all the sultry, ‘Chicago’-style menace that you expect from a musical that promises murder and dresses its entire cast in boots, and her voice is effortlessly attention-grabbing."

"Murder Ballad is a slick 80-minute rock musical portraying a sultry love triangle. While the story is slight, it’s told with propulsive energy and a hint of bitter wit."

"Kerry Ellis has a volcanic intensity as self-destructive Sara, and Victoria Hamilton-Barritt smoulders as the enigmatic narrator."

"A frequently shirtless Ramin Karmiloo brings a brooding muscularity to Tom, while Norman Bowman’s Michael is scarcely any less virile but has the soulfulness of a poet. What the show lacks in originality it makes up for in sheer expressiveness, though staging it in a really intimate venue would allow it to be more thrillingly in-yer-face."

"Murder Ballad feels closer to Jonathan Larson's Rent, with its regular references to the landscape of New York City. It focusses on yet another intense series of dysfunctional contemporary relationships."

"The original Off-Broadway production at Manhattan Theatre Club's studio space was staged in-the-round and brought the audience into close-up focus with its raw, exposed, needy passions. On an elevated stage at the Arts, it feels more distant."

"Karimloo has a raw, animalistic energy, his pumped-up physique is matched by an expressively powerful voice. Ellis also uses that peerless rock voice to elevate her songs into a different dimension. The wonderful Norman Bowman has an actorly authority and a powerful voice. But it is all held together with a spellbinding aura of mystery and intrigue by Victoria Hamilton-Barritt as the narrator."

"Director Sam Yates and designer Richard Kent give it an appropriately slick and edgy sheen. The video work of Laura Perrett on a wall of screens at the back of the stage sometimes provides an over-literal commentary." 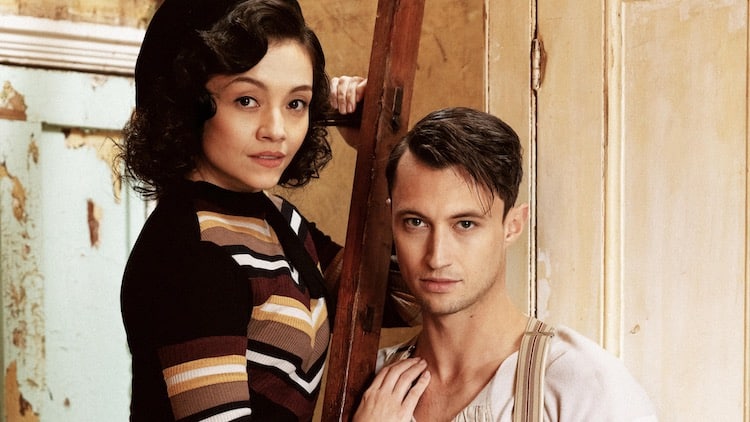