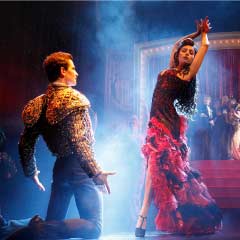 A scene from Strictly Ballroom The Musical

Following our shameless begging in April this year, Baz Luhrmann’s musical adaptation of his hit 1992 (I know, 1992!) movie Strictly Ballroom may be foxtrotting to the West End.

Baz in today’s Daily Mail adds fuel to the rumours, saying that Luhrman and his team are trying to find a London theatre for the show.

The sequinned show is set against the cut-throat (and camp) world of competitive ballroom dancing and the movie was a huge hit for Luhrmann.

The stage show of Strictly Ballroom launched in Sydney in March to mixed reviews but great audience reaction and box-office returns. A reworked show is promised for Melbourne, which opens on 20 January 2015, and everyone – including West End theatre owners – will be keen to see whether the show has been reworked sufficiently for a West End and Broadway run.

Luhrmann’s plan is to open in the West End in late 2015 or early 2016, although all of the London theatres his producers have scouted so far are currently busy.

Another Baz Luhrmann movie – Moulin Rouge – is frequently the most requested movie to be turned into a stage show, so who knows, maybe that will be next!

More about Strictly Ballroom on WestEndTheatre.com including video and photos > 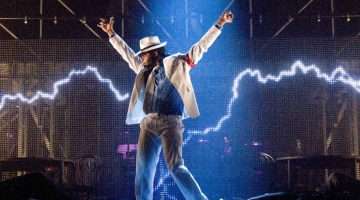 ‘Thriller Live’ to close at the Lyric Theatre in London