Behind the Beautiful Forevers at the National Theatre

David Hare brings his new play Behind the Beautiful Forevers to the National Theatre, based on the book by Katherine Boo.

David Hare brings his new play Behind the Beautiful Forevers to the National Theatre, based on the book by Katherine Boo.

A fascinating new play by award-winning playwright David Hare (Skylight) set in India and based on the acclaimed book by Katherine Boo.

Katherine Boo spent three years in Annawadi in India recording the lives of its residents. From her uncompromising book, winner of the National Book Award for Non-Fiction 2012, David Hare has fashioned a tumultuous play on an epic scale.

Behind the Beautiful Forevers is directed by Rufus Norris.

India is surging with global ambition. But beyond the luxury hotels surrounding Mumbai airport lies a makeshift slum, full of people with plans of their own.

Zehrunisa and her son Abdul aim to recycle enough rubbish to fund a proper house. Sunil, twelve and stunted, wants to eat until he’s as tall as Kalu the thief. Asha seeks to steal government anti-poverty funds to turn herself into a ‘first-class person’, while her daughter Manju intends to become the slum’s first female graduate.

But their schemes are fragile; global recession threatens the garbage trade, and another slum-dweller is about to make an accusation that will destroy herself and shatter the neighbourhood. 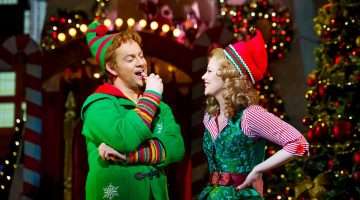