Don’t miss the National Theatre’s latest family show, which comes to you in the exciting tradition of War Horse and His Dark Materials.

For this adaptation of Erich Kästner’s classic children’s adventure story about a boy learning to rely on himself – and his new friends – the Olivier stage transforms into 1920’s Berlin. It’s a place full of surprises and danger, where everything moves at the speed of your imagination.

When his money is stolen on a train by a mysterious stranger, young schoolboy Emil thinks he’s lost everything. But as he starts tracking down the thief, he soon discovers that he’s not alone in the big city after all.

Join Emil as he says goodbye to his mother, leaves his small town and sets off on a unique adventure that will change his life. 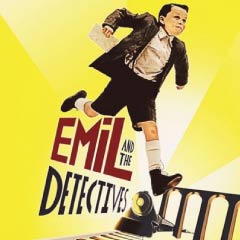