Skip to content
The Old Vic, London
Booking to 24 May 2014
Sorry, this show is not currently booking.

Lindsay Posner directs the UK premiere of Broadway hit Other Desert Cities at the Old Vic.

The Broadway hit play Other Desert Cities gets its UK premiere at the Old Vic Theatre in an exciting new production by Lindsay Posner (Noises Off, The Winslow Boy).

The Old Vic’s auditorium has been transformed into the round for the play, recreating the transformation of the auditorium that was first seen in 2008 with the Old Vic’s production of The Norman Conquests.

Jon Robin Baitz has written for stage and screen including the hit TV series Brothers and Sisters.

Brooke Wyeth returns to the family home in Palm Springs for the first time in six years with some incendiary news for her Republican parents Polly and Lyman, her brother Trip and her recovering alcoholic aunt Silda. She is about to publish a memoir about her family, exposing a pivotal moment in their painful and explosive past, her actions threatening to push fractured family relations to a point beyond repair. 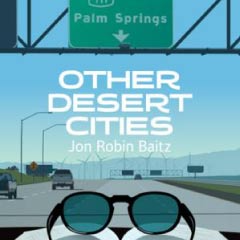 Performance dates
Booking to 24 May 2014

News about Other Desert Cities
More >

Martha Plimpton to join the cast of Other Desert Cities at Old Vic
American star Martha Plimpton joins the cast of Other Desert Cities at the Old Vic Theatre. [caption id="" align="alignright" width="240"] Martha Plimpton as Virginia Chance in Raising Hope[/caption] Acclaimed US actress Martha Plimpton is hitting the West End stage in Lindsay Posner's new production of Other Desert Cities (from 13 March 2014) at the Old Vic. She joins a stellar cast that includes Sinéad Cusack and Clare Higgins in  the UK premiere of Jon Robin Baitz’s acclaimed Broadway play. Also signing on to the production are British stage and TV actor Peter Egan and Australian actor Daniel Lapaine. In the play Martha Plimpton plays Brooke Wyeth. The multi award-winning star has appeared in numerous movies including The Goonies, Parenthood and Running on Empty. TV credits include her current role as Virginia Chance in Raising Hope, plus The Good Wife, ER, Grey’s Anatomy and How To Make It In America. On Broadway, her credits include Top Girls, Coast of Utopia and Pal Joey. Peter Egan plays Lyman Wyeth. Perhaps best known for sitcom Ever Decreasing Circles, Peter's other TV work includes Cold Comfort Farm, plus Big Breadwinner Hog, A Perfect Spy, Joint Account, Downton Abbey and Lillie. Film work includes The Hireling, Chariots of Fire, Bean, The I Inside, The Wedding Date and Man to Man. Peter's stage work includes People, Hamlet, Journey's End Arms and the Man, You Never Can Tell, M Butterfly, Noises Off, Art, The Secret Rapture and Déjà Vu. Daniel Lapaine plays Trip Wyeth. His stage work includes Hedda Gabler, All My Sons, The Dance of Death, Scenes from the Back of Beyond and F**king Games. On film, work includes Zero Dark Thirty, Dead in Tombstone, Muriel’s Wedding and Double Jeopardy. TV credits include Vexed, Identity, Vera, Black Mirror, Hotel Babylon, Sex the City and Me, Jane Hall and The Good Housekeeping Guide. The drama stars Sinéad Cusack and Clare Higgins as two sisters Silda Grauman and Polly Wyeth. BOOK Book tickets to Other Desert Cities at the Old Vic Theatre