This wickedly funny new comedy is set in May 2009 as Gordon Brown’s government goes into meltdown and ambitious MP Robert Houston (Ben Miller) decides to jump ship from Labour to Tory. But suddenly the Expenses Scandal breaks and a world of dodgy receipts results in Houston and his family in Parliamentary and personal panic.

The Duck House is directed by award-winning writer and director Terry Johnson, designed by Lez Brotherston, with lighting by Mark Henderson and sound by John Leonard. 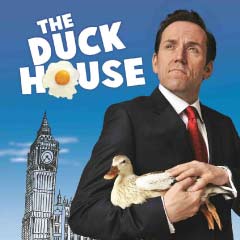 3 thoughts on “The Duck House at the Vaudeville Theatre”