This weekend’s annual theatre event West End Live is set to be the biggest ever as West End shows perform at the free event in Trafalgar Square this weekend (Saturday 22 and Sunday 23 June).

Organised by the Society of London Theatre and Westminster City Council, the free theatre event returns to Trafalgar square this weekend, on Saturday 22 and Sunday 23 June 2013.

Now in its 9th year, more shows than ever before will perform live on stage in the Square including some big premieres – namely the first outing for Tim Rice’s new musical From Here To Eternity,  featuring  the as-yet unnamed actor set to play Private Robert E Lee Prewitt singing a song called Fight The Fight. Other premieres include the Menier Chocolate Factory production The Color Purple and the Open Air Theatre’s new production of The Sound Of Music.

New shows now running in the West End and playing at the event will include A Chorus Line, Once: A New Musical, Limbo, Sondheim’s Merrily We Roll Along and The Golden Voice starring Darren Day.

The event will also see Dirty Dancing – The Classic Story On Stage return to West End Live as it comes back to the West End for a limited run.

Other shows to be featured in the event include West End long-runners Mamma Mia!, Rock of Ages, We Will Rock You, War Horse, Matilda The Musical, Stomp, Top Hat, Billy Elliot, The Phantom of the Opera, The Bodyguard, Let It Be, Disney’s The Lion King, Les Miserables, Jersey Boys, Spamalot, Wicked, Jersey Boys, Matilda The Musical and Thriller Live. It will also be one of the last times to catch Burn The Floor before it leaves the Shaftesbury Theatre. 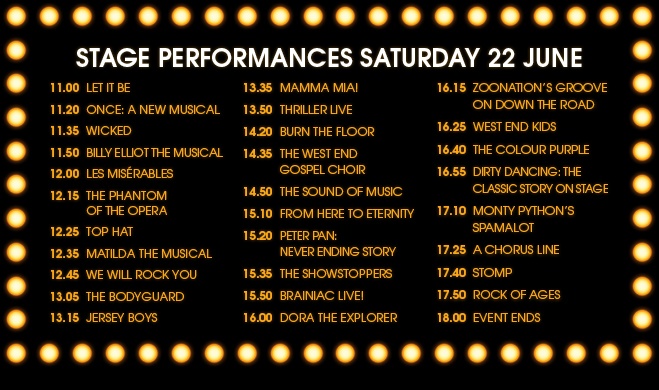 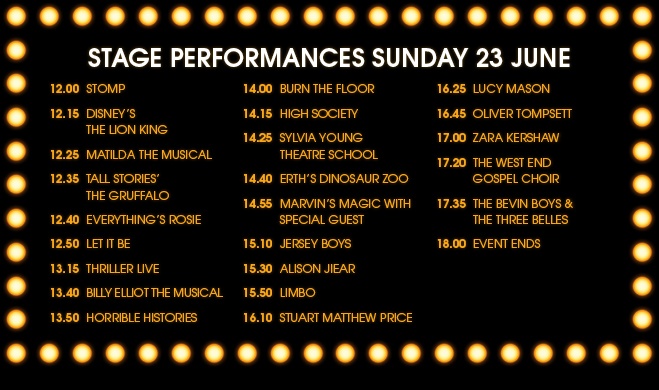