Darren Day stars in new British musical The Golden Voice, this summer at the Arts Theatre. Written by West End musical director and vocal coach Nick Fogarty and directed by Guy Retallack, the show charts one man’s rise through a TV talent show, his fall from fame and rise again.

The Golden Voice stars Darren Day as Mike Chariot, a fame-hungry singer who betrays his best friend and abandons his childhood sweetheart to win the nation’s favourite talent show, ‘The Golden Voice’. Chariot is soon to realise that he is merely a puppet for the record company and TV execs, and too famous to return to his old life he decides to disappear. After a brief media frenzy the machine moves on and he is all but forgotten.

Fast forward 20 years, a wiser Mike Chariot is back to make amends and help young singers and musicians achieve their dreams without entering television talent shows. However his noble quest will bring him back in contact with his embittered former best friend Jim Ryan, who descended into a life of crime after Chariot split up their band. And now Jim has the power to exact his revenge. 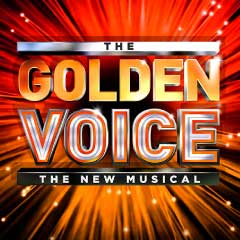