Following its critically-acclaimed, sold-out run at the Chichester Festival Theatre, Singin’ in the Rain is making a big splash at London’s Palace Theatre.

Set in the roaring ’20s and era of silent movies, this glamorous show is full of Hollywood charm, romance and comedy. Jonathan Church’s witty new production includes a glorious score including the classics Good Morning, Make ‘em Laugh, Moses Supposes and the legendary Singin’ in the Rain. 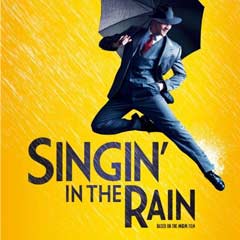 “A night of sheer delight” Telegraph

Mask
You are welcome to wear a face covering when inside the theatre if you wish.
Your Visit
At least 48 hours before the performance we’ll ask you to check-in online to confirm your attendance. If you opted for e-tickets or print-at-home tickets, they will be emailed to you after completing check-in. E-tickets can be displayed on your mobile or smart device. Print-at-home tickets can be printed or presented on your mobile or smart device.
Covid safety
This venue is complying with the latest industry 'See It Safely' guidelines.

News about Singin' in the Rain
More >

The West End production of SINGIN’ IN THE RAIN will have its final performance at the Palace Theatre on Saturday 8 June 2013 ahead of an extensive UK tour. The production which will open at Manchester’s Opera House on Wednesday 13 November and move to Cardiff’s Wales Millennium Centre for a Christmas and New Year season. Full details of the tour, including casting, will be announced shortly.

Rebecca Quigley, Producer and Managing Director, Stage Entertainment UK, said: “The first time I saw Singin’ in the Rain at Chichester I knew we had to bring the show to the West End and, eventually, beyond. We’ve had a wonderful run at the Palace Theatre and everyone at Stage Entertainment is so proud to have been part of making it a hit there. I’d like to thank everybody at the theatre and every single member of the Singin’ family who’ve made the show the success it is – and of course the hundreds of thousands of smiling audience members who’ve been part of the experience. We’re thrilled that the show will now set off around the country to delight and, in the case of some sections of the stalls, soak many more people to come!”

Jonathan Church’s production of Singin’ in the Rain was acclaimed by audiences and critics alike when it opened in the West End in February last year after an extended, sold out run at the Chichester Festival Theatre. The production, which uses half a mile of flexible pipe work, a 10 tonne water tank housed in the orchestra pit and a water system that creates a downpour from above and flooding from below the stage, ‘raining’ (and recycling) over 12,000 litres of downpour per performance, is produced in the West End by Stage Entertainment UK and Chichester Festival Theatre.

In the West End Adam Cooper continues to lead the company as Don Lockwood. He is joined by Louise Bowden as Kathy Selden and Stephane Annelli as Cosmo Brown who complete the iconic trio made famous by Gene Kelly, Debbie Reynolds and Donald O’Conner in 1952 MGM musical film. Jennifer Ellison stars as silent movie screen siren and owner of a voice never meant for the ‘talkies’, Lina Lamont. The principal cast also features Sandra Dickinson as Dora Bailey and Miss Dinsmore and Peter Forbes as RF Simpson.

The stage production of Singin’ in the Rain is based on the classic Metro-Goldwyn-Mayer film and produced by arrangement with Maurice Rosenfield, Lois F Rosenfield and Cindy Pritzker Inc. This production is by special arrangement with Warner Bros. Theatre Ventures, Inc. Music Published by EMI.

Jennifer Ellison’s Hollywood glamour in Singin’ in the Rain photoshoot

TV and stage star Jennifer Ellison is joining Adam Cooper in Singin’ in the Rain at the Palace Theatre from 18 February 2013.

And she looks every bit the movie star in these hot new pictures taken for the show.

Jennifer Ellison has forged a strong stage career, recently starring as Paulette in Legally Blonde on tour, and featuring in Boeing Boeing at the Comedy Theatre, Chicago at the Adelphi Theatre and Calendar Girls on UK tour. She is most famous for playing Emily Shadwick in Brookside and appearing in Hell’s Kitchen and Dancing On Ice. Other TV credits including Lynda La Plante’s The Commander: Abduction, Hotel Babylon and The Verdict.

Jonathan Church’s new production of Singin’ in the Rain is to transfer to the Palace Theatre following its critically acclaimed, sell-out run at Chichester Festival Theatre. Church’s production of Singin’ in the Rain, with choreography by Andrew Wright, is based on the classic 1952 MGM film and produced in the West End by Stage Entertainment UK and Chichester Festival Theatre, and is booking at the Palace Theatre from 4 February 2012, initially through to 29 September 2012. The production will open on TUESDAY 15 FEBRUARY, with tickets on public sale from MONDAY 26 SEPTEMBER 2011.

The West End cast is led by Adam Cooper as Don Lockwood, Daniel Crossley as Cosmo Brown, Scarlett Strallen as Kathy Seldon and Katherine Kingsley as Lina Lamont, with Michael Brandon as RF Simpson and Sandra Dickinson as Dora Bailey/Miss Dinsmore, all of whom will reprise their roles from the original Chichester production.

Singin’ in the Rain features songs by Nacio Herb Brown and Arthur Freed, including Make ‘em Laugh, Good Morning, Moses Supposes and Singin’ in the Rain, original screenplay and adaptations are by Betty Comden and Adolph Green. With choreography by Andrew Wright, the production is designed by Simon Higlett, with sound by Matt McKenzie and lighting by Tim Mitchell. Church’s production of Singin’ in the Rain opened on 27 June 2011 at the Festival Theatre, Chichester, where it played to capacity houses and extended its run to cope with demand. The 1952 MGM film of the same name, which will celebrate the 60th anniversary of its release next year, starred Gene Kelly, Donald O’Connor and Debbie Reynolds and is considered one of the most beloved and enduring movie musicals of all time.

Multi award-winning Adam Cooper’s theatre credits include Sky Masterson in Guys and Dolls at the Piccadilly Theatre, Tin Man in The Wizard of Oz, On Your Toes and The Wind in the Willows at the Royal Festival Hall and Zorro on tour in the UK. With the Adventures in Motion Pictures Company as well as playing the Angel in Cinderella, he created the award-wining role of the Swan in Swan Lake, which, after opening at Sadler’s Wells Theatre, transferred to the West End, LA and Broadway. As a member of the Royal Ballet Company (1989-97) his numerous credits include Romeo and Juliet, Myerling, The Judas Tree, Onegin and La Ronde.

Scarlett Strallen’s theatre credits includes The Music Man at Chichester Festival Theatre, Passion for the Donmar Warehouse, the title role in Mary Poppins in the West End and on Broadway, The Merry Wives of Windsor for the Royal Shakespeare Company, The Witches of Eastwick at the Theatre Royal Drury Lane, Chitty Chitty Bang Bang at the London Palladium and HMS Pinafore, Twelfth Night and Cymbeline for Regent’s Park Open Air Theatre. Her film credits include Beyond The Sea and The Snow Queen.

Katherine Kingsley’s theatre credits include The 25th Annual Putnam County Spelling Bee for the Donmar Warehouse, Aspects of Love at the Menier Chocolate Factory, Piaf at the Donmar Warehouse and Vaudeville Theatre, (Olivier Award nomination) High Society at the Shaftesbury Theatre, The Canterbury Tales at Bristol Old Vic and The 39 Steps at the Liverpool Playhouse and on UK tour. Her film credits include Days of the Siren, Now We Are Three and 100 Second Marriage.

Michael Brandon’s UK theatre credits include the title role in Jerry Springer – The Opera which opened at the National Theatre and transferred to the West End, Wet Weather Cover at the Arts Theatre, Speed The Plow for the Theatre Royal Lincoln and On the Waterfront for the Hackney Empire. On television he is known for playing Dempsey opposite Glynis Barber in Dempsey and Makepeace. His other television credits include roles in Hustle, The Last of the Lehman Brothers, Doctor Who, New Tricks, Trial and Retribution and Ally McBeal. His film credits include Captain America – The First Avenger, Me and Orson Welles and Presumed Dangerous.

Sandra Dickinson’s theatre credits include A Woman of No Importance for Salisbury Playhouse, the UK tour of Anything Goes, Chitty Chitty Bang Bang at the London Palladium, The Graduate at the Gielgud Theatre, Orpheus Descending at the Donmar Warehouse and Not About Nightingales for the National Theatre. Her television credits include White Van Man, Two Point Four Children, New Tricks, The Hitchhiker’s Guide to the Galaxy and Doctor Who. Her film credits include Tormented and Malice in Wonderland.

Jonathan Church has been Artistic Director of Chichester Festival Theatre since 2006. In the West End he has directed Of Mice and Men at the Savoy and The Old Vic, The Witches at Wyndham’s and A Busy Day at the Lyric Theatre. His productions at Chichester include The Real Inspector Hound, The Critic, The Grapes of Wrath, The Life and Adventures of Nicholas Nickleby, Hobson’s Choice, The Circle and Pravda.

Previously for Chichester Festival Theatre award-winning Andrew Wright has choreographed 42nd Street. His other choreography credits include By Jeeves for the Landor Theatre, Almost Like Being In Love at the National Theatre, Naked Boys Singing at the King’s Head and Arts Theatre and The Showgirl Within at the Garrick Theatre. As well as many pantomimes he has choreographed six performances of The Night of 1000 Voices at the Royal Albert Hall, Sunday Night at the Theatre Royal and Evita for Leeds Grand Theatre.

Chichester Festival Theatre is one of this country’s most prolific and successful producing houses having transferred many productions to the West End and beyond, including recently the multi-award winning productions of Macbeth and ENRON (which both also transferred to Broadway), the world premiere of Yes, Prime Minister, and Rosencrantz and Guildenstern Are Dead which recently completed a run at the Theatre Royal Haymarket. Chichester’s critically acclaimed revival of Caryl Churchill’s Top Girls is currently playing at London’s Trafalgar Studios. Chichester Festival Theatre celebrates its 50th Anniversary in 2012.

Singin’ in the Rain is based on the classic Metro-Goldwyn-Mayer film and produced by arrangement with Maurice Rosenfield, Lois F Rosenfield and Cindy Pritzker Inc. This production is by special arrangement with Warner Bros. Theatre Ventures, Inc. Music Published by EMI.