The National Theatre’s sold out production of Frankenstein will play two dates as part of the NT Live cinema programme. 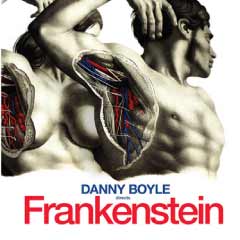 Oscar-winning director Danny Boyle’s new production of Frankenstein at the National Theatre will be screened live in cinemas on two separate dates, the first time the initiative has covered two performances.

This is to allow audiences to see both stars of the show in the leading roles, as Benedict Cumberbatch andJonny Lee Miller alternate in the parts of Victor and his monster.

This new adaptation of Mary Shelley’s classic Gothic novel has been reimagined by Nick Dear and told from the point of view of the monster. The first block of performances for the play are already sold out.

NT Live is an initiative to broadcast live performances of the National’s plays onto cinema screens in the UK and worldwide. The second season of National Theatre Live, which now covers 360 screens across 20 countries, recently screened the Donmar Warehouse’s production of King Lear, with Derek Jacobi, filmed at the Donmar’s home in Covent Garden on 3 February; following Frankenstein, Howard Davies’s production of The Cherry Orchard starring Zoe Wanamaker will be filmed on 30 June. A third season begins in the autumn.

Check the NT Live websites for times and locations