As Priscilla Queen Of The Desert The Musical approaches its second birthday in the West End, Richard Grieve, best known for his role as Jonny Foster in ITV1’s Emmerdale, will join the Company to play Tick from Monday 7 March 2011. Grieve joins cast members Don Gallagher (Bernadette) and Oliver Thornton (Adam) in the Olivier award-winning musical at the Palace Theatre, which is booking until 7 January 2012. Later this month the Broadway production of Priscilla Queen Of The Desert will start previews on 28 February, with opening night on 20 March 2011.

Richard Grieve’s most recognised roles include Jonny Foster in Emmerdale, Dr Lachlan Frazer in Home & Away and Sam Kratz in Neighbours. His UK stage credits include national tours of Footloose The Musical, Dial M For Murder and There’s No Place Like A Home.

Based on the Oscar® award-winning film Priscilla Queen Of The Desert The Musical tells the story of Tick, Bernadette and Adam, a glamorous Sydney-based performing trio who agree to take their show to the middle of the Australian outback.

Priscilla Queen Of The Desert The Musical had its world premiere in Sydney in October 2006 and subsequently wowed audiences and critics alike in Melbourne and New Zealand, becoming the most successful Australian musical of all time. After a return Sydney season and a recent well received run in Toronto, further international dates are in discussion for productions in Italy, Brazil, Scandinavia and Germany.

Priscilla Queen Of The Desert The Musical is written by Stephan Elliott and Allan Scott. Direction is by Simon Phillips, Choreography is by Ross Coleman, Musical Supervision and Arrangements by Stephen ‘Spud’ Murphy and Production Design is by Brian Thomson. Tim Chappel and Lizzy Gardiner have re-created their Oscar®-winning Costume Designs, which were originally designed for the film. BAFTA Award winning Make Up design is recreated by Cassie Hanlon. Lighting is designed by Nick Schlieper and Sound design by Michael Waters.

Priscilla Queen Of The Desert The Musical is produced in London by Liz Koops and Garry McQuinn for Back Row Productions, Michael Hamlyn for Specific Films, Allan Scott, John Frost, Michael Chugg, David Mirvish and The Really Useful Group, in association with MGM on Stage, Darcie Denkert and Dean Stolber, based on the Latent Image/Specific Films Motion Picture, distributed by Metro-Goldwyn-Mayer Inc. 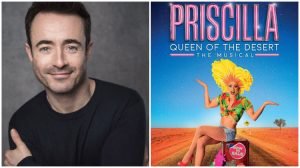