Mike Bartlett’s Olivier Award winning play about love and identity will play a limited season at the Ambassadors Theatre in London from 5 March 2022 until 4 June 2022, with an official press night on 15 March 2022.

Jonathan Bailey will return to the stage for the first time since his Olivier Award winning performance in Company. Jonathan plays Viscount Anthony Bridgerton in the Netflix’ period drama, Bridgerton, a role he is reprising in the second series scheduled for release in 2022. His other TV credits include the ITV series Broadchurch, Leonardo da Vinci in Leonardo, Me and Mrs Jones, Doctor Who and WIA (all for the BBC) and Crashing and Chewing Gum for Channel 4. His theatre credits include David Hare’s South Downs, American Psycho at the Almeida Theatre, The York Realist at The Donmar Warehouse, and King Lear (alongside Sir Ian McKellen) for Chichester Festival Theatre.

Whilst he is best know for his film roles, Rocketman, Kingsmen: The Secret Service, Kingsmen: The Golden Circle, Eddie The Eagle and Robin Hood, Egerton has appeared on stage in The Last of the Haussmans at the National Theatre and in No Quarter at the Royal Court Theatre.

‘I feel so excited to be working on this beautifully crafted and hilarious play by Mike Bartlett. It keeps you on the edge of your seat throughout. A truly theatrical piece in that it asks the audience to enter the imagination of the storytelling – as only live theatre can do. It’s also all about the acting so to have such a talented, highly experienced, stellar cast is an absolute dream!’ Marianne Elliott said.

Playwright Mike Bartlett added:  ‘I love Marianne Elliott’s work and have done for a long time, so I’m thrilled to be able to collaborate with her on this revival. Especially with this incredible cast, which I know will bring both a fresh take and vast experience to a play about love, identity and the passionate human being.”

Cock tickets are now on sale. 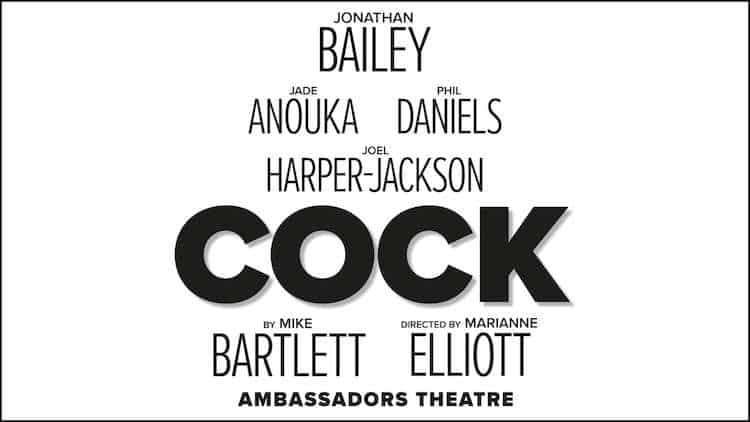