The World Premiere production of Get Up, Stand Up! The Bob Marley Musical in London’s West End has moved to October 2021.

Producers cited the desire for performances to take place without social distancing as the reason for the delayed opening of the highly anticipated new musical. The announcement comes in the same week that Sister Act The Musical has been delayed until Summer 2022 and Good starring David Tennant has also been postponed.

A statement from Producers said:

“Producers of the new musical Get Up, Stand Up! The Bob Marley Musical have today taken the decision to delay the start of performances until social distancing is lifted. The first preview will now take place at the Lyric Theatre on 1 October 2021 with an opening night on 20 October 2021.

The producers are convinced that this joyous and uplifting show will be at its best when a full house can enjoy the legendary music of Bob Marley. For this reason they have decided to pause until a time when it is possible to open theatres at full capacity.

Patrons will be contacted by the box office or their point of purchase in due course with updated booking details.“

The musical is directed by Clint Dyer, newly appointed Deputy Artistic Director of the National Theatre, and stars double Olivier nominee Arinzé Kene (Death of a Salesman, One Night in Miami, Girl From The North Country , Misty ) as Bob Marley.

Based on the life of the iconic Jamaican hit-maker, the musical has been given unlimited access to Marley’s catalogue of music and features much loved classics including ‘Exodus’, ‘No Woman No Cry’, ‘Waiting in Vain’, ‘Three Little Birds’, ‘I Shot the Sheriff’, ‘Could You Be Loved’, ‘Redemption Song’.

The Lyric Theatre’s current production of Six The Musical will now run until 22 August 2021, subject to receiving clear guidance from the government on resuming performances.

Get Up, Stand Up! The Bob Marley Musical is booking from 1 October 2021 until 3 April 2022 at the Lyric Theatre, London. 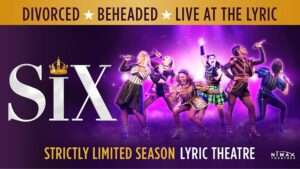