For the uninitiated, The Showstoppers transform audience suggestions – for setting, musical styles, show title and more – into an entirely different West End show every single night! Each performance is guaranteed to have you laughing in your seat as they create shows packed with high drama, superb lyrics, dazzling dance routines and catchy melodies – entirely made up on the spot.

With 12 years as an Edinburgh Festival must-see phenomenon, a critically acclaimed West End run, The Showstoppers have blazed a trail in world class improvised comedy since 2008 and delighted audiences across the globe.

One of the last shows to close in March, the Showstoppers turned their final performance at the Lyric Theatre into an online streaming event which has been seen by 112,000 people to date. And whilst in lockdown, they kept their burgeoning fans entertained with musical challenges from West End celebrities including Elaine Paige, Ramin Karimloo and Derren Brown.

For those concerned about heading out into the West End, the Garrick Theatre complies with covid-19 secure guidelines which involves reduced capacity to enable social distancing. Other safety measures include temperature checks, hand sanitation, face coverings, contactless tickets and track and trace. The venue is also deep cleaned after each performance.

Tickets are now available to book. 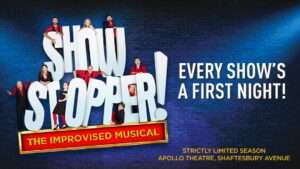