As their BBC Radio 4 series hits the airwaves, Showstopper! plays the West End.

Following regular residencies on the London Fringe and the launch of their BBC Radio 4 series,
Showstopper! plays Tuesday nights at the Ambassadors Theatre this spring.

Showstopper! is entirely improvised: a brand new musical is created at every performance. A writer has
just one night to create a hit show to impress his producer. Stuck for ideas, he takes audience
suggestions for a title, storylines and musical styles that they’d like to see in the show. The
Showstoppers then create a musical from scratch based around that structure. Utterly unpredictable,
frequently side‐splittingly funny and featuring dazzling dance routines and catchy melodies.

Showstopper! tours nationally, plays regular London residencies and has enjoyed three sell‐out
Edinburgh Fringe seasons in 2008, 2009 and 2010. On 16 March last year they made their BBC Radio 4
debut with a special 30 minute edition of an improvised musical and you can hear their new BBC Radio
4 series every Wednesday at 6.30 pm from January 19, 2011 until the end of February. The company
consistently win critical and popular acclaim and audiences return to see them again and again because
every show is as different as it is brilliant. Recent review quotes include:

“Glorious… Showstopper! simply shouldn’t stop.” The Observer
“The show makes your jaw drop in impressed amazement and your ribs ache with laughter…
Mail On Sunday *****
“A professionally staged and brilliantly executed piece of work that is a shining example of how good
improv can be.” Chortle ****

This format was created by Sticking Place Artistic Director Adam Meggido and veteran improviser
Dylan Emery, both of whom worked closely with the late, great theatre maverick, Ken Campbell. This
collaboration resulted in Shall We Shog? (Shakespeare’s Globe 2005); Décor Without Production (for
The Royal Court Theatre 50th anniversary celebrations); In Pursuit Of Cardenio (Edinburgh Festival
2006); and the extraordinary, annual 50‐hour Improvathon – the only event of its kind in Europe.

Book tickets to Showstopper! The Improvised Musical at the Ambassadors Theatre 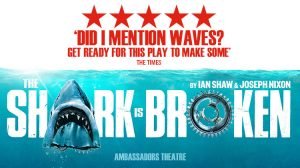