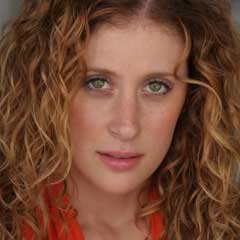 She was here only a few months ago playing Sheila in the London transfer of Broadway hit HAIR at the Gielgud Theatre. And now Matthew Warchus has cast her in new movie-to-musical Ghost, based on the Oscar-winning film.

Caissie, who hails from Canada and trained at New York’s prestigious American Musical and Dramatic Academy, got her big break playing Penny Pingleton in the Broadway and US tour of Hairspray. She hasn’t stopped since, having played Maureen Johnson in the US tour of Rent, Elphaba in the LA production of Wicked, and then HAIR on Broadway and in London.

In Ghost The Musical Caissie takes on the lead role of Molly, played in the movie by Demi Moore. When her boyfriend Sam, played in the show by Richard Fleeshman, is trapped as a ghost between this world and the next, he tries to communicate to her through a phoney psychic (Sharon D Clarke), in the hope of saving her from his murderer.

Ghost the Musical, which starts off at the Opera House in Manchester before opening at the Piccadilly Theatre in London in June, will be directed by Matthew Warchus (Deathtrap, La Bete), with music and lyrics by legendary pop and rock writers Dave Stewart (Eurythmics) and Glen Ballard (writer of Michael Jackson’s Man in the Mirror). The show will also feature the classic song from the movie, Unchained Melody. Ghost The Musical will be designed by Rob Howell, with illusions and stage effects by Paul Kieve (Harry Potter and the Prisoner of Azkaban) and a script by the original Oscar-winning screenplay writer Bruce Joel Rubin.