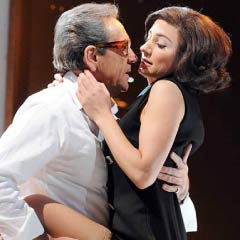 Onassis proves to be a text book show for the term “mixed notices”, with Martin Sherman’s play dividing critics at the Novello Theatre.

The play has polarised critics as much the infamous Greek shipping tycoon Artistotle Onassis did in his lifetime, with reviews veering from Michael Coveney in the Independent heralding it as a “fascinating new play” to Charles Spencer in the Telegraph dubbing it an “excuse to reheat a lot of high-class scandal and rehearse a few conspiracy theories about Aristotle Onassis”.

Based on the last years of the controversial Greek tycoon, the play was originally produced as Aristo at Chichester to mixed reviews but with glowing praise for Lindsay’s performance. Sherman and director Nancy Meckler have subsequently rewritten the piece.

Read round-ups from the Guardian, Telegraph, Independent, Express and Variety below.

Special offer: Save £23.50 on tickets to Onassis at the Novello Theatre in London

"The ever-magnificent Robert Lindsay gives a gripping performance as the despotic Onassis with a fearsome, manic gleam raging behind the tortoiseshell glasses. His spitting anger is worryingly realistic as he screams about those he hates."
"His performance is a strong, forceful portrayal of one of the world's most devious men and he has cleverly caught much of the Onassis character and charisma."
"Lydia Leonard may be something of a Jackie lookalike but she remains unconvincing as the one-time First Lady of America... Anna Francolini, however, is moving as the rejected diva Maria Callas. Apart from actually looking like the great singer she displays just the right amount of desperate sadness and heartbreak at the way Onassis treated her. Surely a woman used."
"Director Nancy Meckler manages to keep the action going in this well-constructed drama but one could not help feeling that it is all more like a series of theatrical notes of the last years of Onassis's life." - Daily Express

"First seen at Chichester two years ago under the title of Aristo, Martin Sherman's play poses a huge question: why on earth did people of taste and judgment bother to revive a piece as laughably awful as this? As a bio-play with pretensions, signally unfulfilled, to Greek tragedy, it falls between every available stool and makes one wonder why we should be bothered with the shenanigans of the super-rich."
"Sherman has written not so much a play as a part, and it is one that Robert Lindsay fills to overflowing. But, as if to compensate for the emptiness of the dialogue, he is forced to lapse into an Anthony Quinn style of over-acting which I'm tempted to dub Exorbitant the Greek." - The Guardian

"Essentially, [the play] is an excuse to reheat a lot of high-class scandal and rehearse a few conspiracy theories about Aristotle Onassis, the Greek shipping magnate who had a long affair with Maria Callas before marrying Jackie Kennedy. And it gives Robert Lindsay, a chance to dominate the stage in one of those showy, high-definition performances in which he specialises."
"One leaves the theatre experiencing the kind of guilt (over wasted time) and throbbing head (from information overload) that would follow a night on the retsina in a Greek taverna."
"The tone is strangely uneven too, ranging from wry comedy to the ridiculously overblown."
"It's time Lindsay took his great talent seriously, and did some work that is worthy of it." - Daily Telegraph

"Martin Sherman's fascinating new play, battening on to all the outlandish suggestions in Peter Evans's racy Onassis biography, subscribes to the legend and compiles a modern Greek tragedy around the utterly mesmerising performance of Robert Lindsay as the shameless monster."
"Lindsay is trimmer and lither than Onassis, and has an over-worked habit of eliding into an Anthony Quinn-style sideways shuffle among his friends in the taverna, but he exudes unadulterated malice and horrible egoism."
"Director Nancy Meckler sets this riveting piratical performance in a stark white setting designed by Katrina Lindsay, flecked with scudding clouds and rippling water." - The Independent

"Given the notoriously loud mouth of its protagonist, it's unsurprising that Martin Sherman's "Onassis" seeks to explain the glamour attached to the egomaniacal Greek shipping magnate Aristotle Onassis. Unfortunately, this "What becomes a monster most?" bio-drama comes to no conclusions besides extreme wealth and personal magnetism. Robert Lindsay captures the latter with magnificent swagger, but cannot compensate for the play's severe lack of drama."
"Prowling, growling and grinning like a wolf in glasses, Lindsay clearly relishes playing a man who forever gets his own way. It's a kind of tour de fierce, with Lindsay all but winking at the audience."
"Sadly, Lydia Leonard as Jackie is wasted... and an over-wigged, over-costumed Anna Francolini is miscast as a pinched Maria Callas whose accent tours the world." - Variety