Did Mischief Theatre pull another rabbit out of hat?

Mischief Theatre continues it brand of slapstick comedy with Magic Goes Wrong, now playing at the Vaudeville Theatre in London.

The team behind international hits The Play That Goes Wrong and The Comedy About A Bank Robbery have joined forces with legendary American magicians Penn & Teller to create an entertaining new riff on the Goes Wrong brand with a show packed with comedy and magic.

The audience are cast as onlookers at a charity spectacular for those injured during magic tricks, where the fundraising total keeps falling and the body count — of both humans and doves — keeps rising.

Magic Goes Wrong is booking until 30 August 2020 at the Vaudeville Theatre, London.

“It’s a magic show. It starts going wrong. It keeps going wrong, for more than two hours. There, that’s taken care of the plot of this gloriously silly evening. So there is no purpose to Magic Goes Wrong beyond the simple delight in complex cock-ups.”

“Much in the same way The Illusionists has a coterie of performers take to the stage, here a collection of odd-ball entertainers ply their wares and deliver a series of skits. The neat touch is that, peppered throughout the incessant ineptitude, are genuine moments of magical talent – tricks somehow come off, illusions cast a spell over the audience. There’s a mystical method in the madness.”

“a terrific new helping of the art of comic incompetence”

“their commitment to the character-comedy and the skill they deploy to bring their stunts off adds a complexity to their medicinal froth. We buy into the idea that we’re genuinely watching hopeless cases – and we want them to suffer for their idiocy but also, in unexpected ways, transcend it.”

“Funny and entertaining, if under-powered, fusion of magic and comedy. Though it doesn’t hit the highs of some previous Mischief outings, it remains a solidly entertaining show, from a company evidently keen to test itself, and, for once, there are a few sweet instances where everything goes right.”

“The plot is pretty much contained in the title: neurotic magician Sophisticato (Henry Shields) is throwing a charity magic gala in his late father’s memory, and he’s rustled up some truly terrible acts to perform, notably Henry Lewis’s hack mentalist The Mind Mangler, and Dave Hearn’s entertaining The Blade, an amusing send-up of faux-edgy ‘alt’ magicians.”

“That this somehow stretches on for two-and-a-half-hours without really having a plot is not ideal, not least because the ambling pace buries the handful of pretty good tricks in the show – a snappy 90 minutes but with all the tricks intact would surely have been stronger.”

“There’s real magic to enjoy alongside the tomfoolery. Stunts and tricks go awry in this slapstick romp, though the running gag makes it hard to conjure suspense.”

“A fun night out, then – even if the chainsaw that slices Sophisticato’s mother in two is the closest it ever gets to a cutting edge.”

“Many of the illusions remain deeply impressive even when exposed. Otherwise it’s the same Mischief mix of shouty comedy, slapstick and humiliation, for actors and audience. There are some great lines and laugh-out-loud moments, but it would be easier to find an ace in a rigged deck than a trace of subtlety here. The overall tone is lazy, matey, let’s-have-a-laugh bants. Mischief is so adept at developing rapport with an audience, it works anyway. As Paul Daniels used to say: that’s magic.” 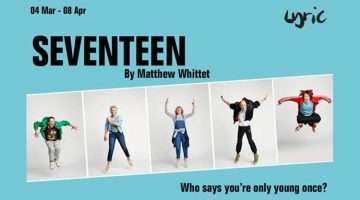 Seventeen at the Lyric Hammersmith.