Producers for the London production of Waitress The Musical have announced it will close in July 2020.

Sara Bareilles musical began previews at the Adelphi Theatre on 8 February 2019, opening to numerous 4-star reviews on 7 March 2019.  It will play its final performance on 4 July 2020 having played c.550 performances, with an additional c.30 preview performances.

As previously reported, Laura Baldwin and Joe Sugg will depart the production in the next few weeks with Hannah Tointon and Joel Montague set to assume the roles of Dawn and Ogie.

Sara Bareilles and Broadway star Gavin Creel will temporarily join the cast on 27 January 2020 as Jenna and Dr Pomatter. The pair both appeared in the Broadway production of the musical in New York at the beginning of the year.

Lucie Jones and David Hunter will rejoin the cast of Waitress on 9 March 2020.

Directed by Diane Paulus with choreography by Lorin Latarro, music and lyrics by Sara Bareilles and book by Jessie Nelson, Waitress tells the story of Jenna, a young woman whose talent for baking gives her the courage to start a new life.

Waitress is booking until 4 July 2020 at the Adelphi Theatre, London. 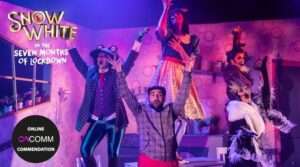