Danielle Hope will join Charlie Stemp and Dawn French in the West End production of Snow White this Christmas at the London Palladium.

The star-studded Christmas pantomime features Danielle Hope in the title role, with rising star Charlie Stemp playing The Prince and comedian and actress Dawn French as The Wicked Queen.

Since winning BBC 1’s Over the Rainbow competition Hope has played numerous leading roles including Dorothy in The Wizard Of Oz (London Palladium), Éponine in Les Misérables (Queens Theatre), Maria in the UK tour of The Sound of Music and Sandy in the recent UK tour Grease. She is currently playing Sherrie in the UK tour of Rock of Ages.

Charlie Stemp returns to the Palladium having made his Broadway debut alongside Bette Midler in Hello, Dolly!. Last year Stemp played the title role in Dick Whittington and won rave reviews in Cameron Mackintosh’s production of Half A Sixpence.

The cast also includes panto favourites Julian Clary as The Man in The Mirror, Paul Zerdin as Muddles, Nigel Havers as The Understudy, Gary Wilmot as Mrs Crumble with Strictly Come Dancing stars Vincent and Flavia as The King and The Queen.

With an all-star cast, spectacular sets & barrels of laughs Snow White promises to be another highlight of the Christmas season from the Olivier Award winning team behind Dick Whittington and Cinderella. 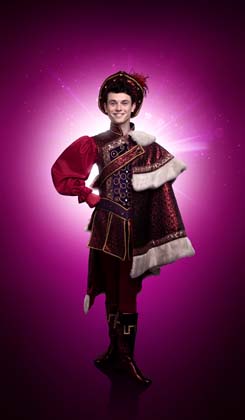