A review round-up for Killer Joe at Trafalgar Studios, London

This revival of Tracy Letts’s violent play about a grotesquely dysfunctional family keeps the audience uncomfortable.

However uncomfortable the play makes you, Letts keeps you hooked from the outset.

On one level, Letts’s play is like a blackly comic parody of a whole raft of family dramas.

I admit to feeling uneasy at the play’s use of female nudity – though, possibly in the interests of gender equality, we also get to see Bloom’s bare bottom – and Simon Evans’s production overplays the atmospheric thunder and lightning and undercooks the comedy. It is, however, extremely well acted. Sophie Cookson admirably suggests that Dottie’s seeming simplicity conceals a sharp-eyed awareness, Adam Gillen captures her brother’s borderline hysteria born out of a thwarted incestuous passion while Steffan Rhodri as their father and Neve McIntosh as their stepmother nicely mix the dim and the deceitful.

Cleverly plotted and queasily gripping, Letts’s play offers a prophetic portrait of a society that, in its reliance on the small screen, is in danger of entertaining itself to death.”

”Orlando Bloom has full command of the stage – but the play itself is queasily dated.

The explicitness (above and beyond the call of duty) shades queasily into the exploitative. You shudder at the play rather than with it during these sequences.

Bloom delivers an impressive performance as the eponymous Joe, a Dallas policeman with a sideline in contract killing.

The production will sell out because of its star but, in general, it’s disappointing and leaves the play looking somewhat dated.”

”An unpleasant revival of a nasty play.

With Orlando Bloom in the lead as corrupt cop/contract killer Joe Cooper, Simon Evans’ production will obviously sell but, despite Bloom’s protestations, one thing is for sure: there is nothing remotely feminist, empowering or timely in watching a woman forced to simulate oral sex on a chicken leg in a production written and directed by men.

Even putting aside the play’s toxicity for the moment, under Evans all the acting is so painfully mannered that the cast forgets to be human, despite the pedigree of excellent actors such as Steffan Rhodri and Neve McIntosh.

Richard Howell’s lighting, big blocks of primary colours like the glare from a TV, is striking and sits well on Grace Smart’s detailed trailer set. That’s about it for the positives.

If the production wants to make that point, it needs to be much more certain of itself. Confused about whether it’s comic or not, farce or horror, its cast of grotesques, acted to their extremest edges, encourages laughter more often than revulsion. That’s a queasy directorial decision.”

”Although Bloom doesn’t exude enough danger in a role that’s been played with icy charisma by Matthew McConaughey on the big screen, he has an air of savvy meanness. Whereas everyone else seems chaotic — especially Adam Gillen’s manic Chris — he’s courteous and cool.

The scene in which he seduces Dottie, soundtracked by Bruce Springsteen’s I’m On Fire, is grimly fascinating. Yet it’s one of several that may leave a sour taste in many theatregoers’ mouths. The most memorable of these involves Joe demanding that Sharla chug on a fried chicken drumstick that he clasps to his crotch.

In the end it’s the shallowness of this two-hour piece that poses greater problems. Only Sophie Cookson’s Dottie has any psychological depth, and Simon Evans’s production never settles into a convincing rhythm. The play is luridly inauthentic, and this revival misses much of its creepiness and grotesque humour.”

“Orlando Bloom is a decent baddie in this lurid, uneven thriller.

Essentially a black comedy about the transactional nature of American society, Letts’s story is both gripping and fairly daft. Still, it’s undeniably pacey and involving, with great sound design from Edward Lewis and some really nifty flourishes from director Evans.

As with the works of Sam Shepard or David Mamet, it’s easy enough to see why British directors are drawn to these hard, dark, action-packed, fairly short sorts of American play, which don’t really have a UK equivalent.

And ‘Killer Joe’ certainly proves that – maddeningly youthful looks accepted – Bloom can give good villain. Still, given that his presence in the cast would get pretty much any play revived, I was frequently stuck thinking: Why this one? But there are enough lurid thrills here to send the casual theatregoer out into the night with the right sort of shiver.” 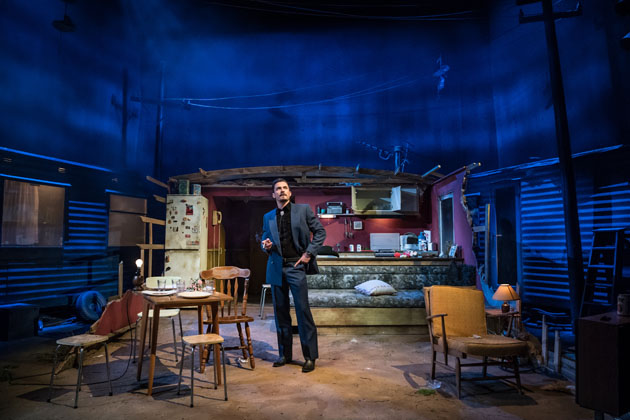