Celebrating the festivals’ 10th anniversary, in addition to headline shows from some of the finest purveyors of circus in the world, there will be a host of family shows including Metta Theatre’s The Little Mermaid, Dick and Dom, The Amazing Bubble Man, Morgan & West, Funz & Gamez and Monski Mouse’s Baby Disco Dancehall.

Highlights of the exciting festival line-up include the Ethiopian Fringe sensation Circus Abyssinia starring the amazing Bibi and Bichu, who will be joined by the well known circus troupe from Australia, Circa, who bring their brand new extravaganza Circa’s Peepshow (6 April – 20 May).

The award winning German production of SOAP brings to the festival a modern twist on the grand tradition of European Circus. With the theme of acrobatics and water combining to create a thrilling and extraordinary visual event brace yourself for mop ballet and bathtub acrobatics.

Hit of the Edinburgh Festival Fringe last year, Circolombia, add to the colourful line-up with a flame filled circus-concert with Latin flavour that joins with a powerful soundtrack some of the world’s best circus performers.

In addition to Circus, Comedy will be performed live on the Southbank throughout the Spring and Summer and include, The Daily Show star Gina Yashere (22nd-24 June), Ventriloquist superstar Nina Conti (28th April to 1st July), comic legend Ruby Wax (26th-27 May).

The directors of Underbelly,Ed Bartlam and Charlie Woods, recently released a joint statement, “we’re celebrating in style with our most exciting programme yet. As well as providing a range of brilliant comedy, cabaret, family entertainment…our headline shows all demonstrate the richness and variety of circus performance all around the world.”

Other acts at the festival this year will include, Glasgow’s dark comedy renaissance man Limmy for a screening of his legendary Vines (2nd June), cult interactive gameshow Knightmare Live (17th June & 8 July), Frisky and Mannish (29th May), circus extravaganza Elixir, and impressions from Jess Robinson (31st May & 5th July).

The Underbelly Festival, Southbank, close to London’s West End will be on from the 6th April to 30th September 2018. 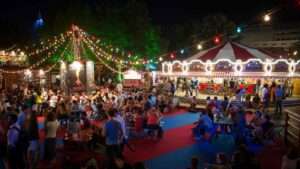 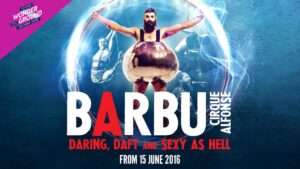 Barbu at the The Spiegeltent

Photo Gallery: A Simple Space at the Udderbelly Festival