Is The Secret Diary of Adrian Mole a shot in the arm for British Theatre? 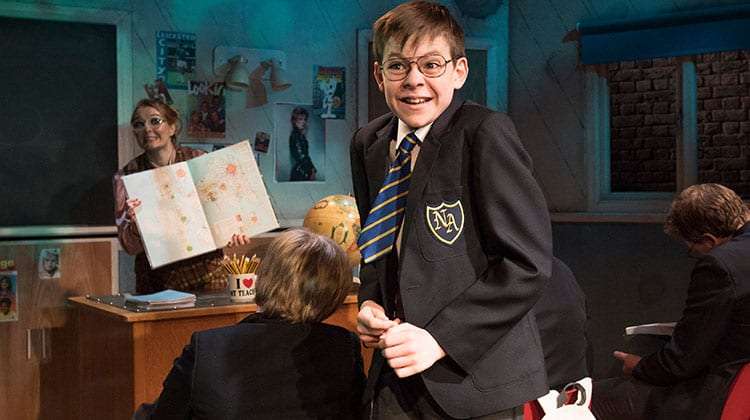 A review’s round-up for The Secret Diary of Adrian Mole Aged 13 3/4 at the Menier Chocolate Factory.

The musical adaption of Sue Townsend’ much loved The Secret Diary of Adrian Mole Aged 13 3/4 has finally arrived on the London stage. First seen at Leicester Curve in 2015, the show directed by Luke Sheppard has been revised, tweaked and polished.

The Secret Diary of Adrian Mole Aged 13 3/4 runs until 9 September 2017 at the Menier Chocolate Factory.

‘What an absolute pleasure it is to be able to offer a full-throated commendation of that rarest of beasts, a perfectly realised new British musical.’

‘Jake Brunger and Pippa Cleary have taken Sue Townsend’s much-loved anguished adolescent, first seen in print in 1982, and made him the beating heart of a warmly appealing bulletin from more innocent times, full of memorable, hummable songs.’

‘anyone who has ever been a teenager will find much to relate to as insecure Adrian (Benjamin Lewis), already afflicted with intellectual leanings, grapples with his unrequited love for brilliant new girl Pandora Braithwaite (Asha Banks) and tries to make sense of his Mum Pauline (Kelly Price, blowsy and bright like her blue eyeshadow) leaving his Dad for the next-door neighbour.’

‘Luke Sheppard’s production fizzes with pep and verve – as Tom Rogers’s delightfully flexible design whizzes us in and out of locations with the greatest of ease.’

‘With the help of a vibrant ensemble, Luke Sheppard tells the earnest diarist’s much-loved story with wit, craft and crackling Cuban dance numbers’

‘In extracting a narrative from the book, it inevitably sacrifices some of the deliciously Pooterish detail of its boy-diarist but it is a fresh and funny show from the young songwriting team of Jake Brunger (book and lyrics) and Pippa Cleary (music and lyrics)..The numbers also drive the action rather than impede it.’

‘Occasionally, you miss Townsend’s wry tone. I also think the creators miss a trick in showing Adrian himself, rather than his embattled gran, routing the bullying Barry. But that aside, the musical precisely captures the growing pains of a self-aware Leicester boy with literary leanings.’

‘As a musical, it has bounce and charm and appealed equally to myself and my 12-year-old advisor.’

‘Luke Sheppard’s new production suffers from a surfeit of visual gags but otherwise it succinctly captures the essence of Townsend’s original.’

‘Adapting a such well-loved character for the stage must be a hugely daunting task. But Cleary and Brunger have risen to the challenge, creating a joyous British musical comedy that feels funny, poignant and – despite being set in the 1980s – remarkably fresh.’

‘In the past it was the warring parents, Pauline and George Mole, who were seen as the mainstay of this musical. This time things have changed, though. Kelly Price, as Pauline, and Dean Chisnall, as George, turn in energetic and song-tastic performances.’

‘perhaps this utterly delightful musical from Jake Brunger and Pippa Cleary knowingly amps up the wry silliness of ‘The Secret Diary of Adrian Mole Aged 13¾’ into something actively more adult-friendly. But any which way, it’s an unbridled hoot.’

‘The songs are good, flimsy fun: jolly pastiches of other genres, ranging from old-fashioned song and dance numbers to a hilariously overwrought synth-rock jobbie.’

‘What’s striking, though, watching Luke Sheppard’s ebullient yet compact staging, is how the piece is absolutely of its time but also stands its ground in the here and now.’

‘though the professional cast, including John Hopkins as the lecherous Mr Lucas, are first-rate, I wasn’t entirely persuaded it always worked having older actors making up numbers as the children. The piece, with prolonged nativity spoof, runs a little out of puff at the end too.’

‘But there are ballads here that may bring a tear to your eye. And the countervailing, upbeat spirit of the piece is an infectious joy.’

The Lover / The Collection