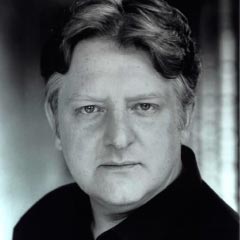 Simon Russell Beale has had a long and accomplished career as an actor, performing a range of roles on stage.

His first London appearance was in William Gaskill’s Royal Court production of Women Beware Women, currently playing at the National Theatre. He has had a long association with the National including his current role in London Assurance alongside Fiona Shaw, which will be broadcast live on 28 June in selected cinemas across the UK and around the world as part of  National Theatre Live. Other National Theatre roles include Major Barbara, Much Ado About Nothing, The Life of Galileo, The Alchemist, Jumpers, for which he was nominated for a 2004 Tony Award for Best Actor, Humble Boy, Hamlet, Battle Royal, Candide (2000 Olivier Award for Best Actor in a Musical), Summerfolk, Money, Othello, Rosencrantz and Guildenstern Are Dead and Volpone (1996 Olivier Award for Best Supporting Actor).

For the RSC, he has appeared in The Tempest, King Lear, Ghosts, the title roles in Richard III and Edward II, The Seagull, Troilus and Cressida, The Man of Mode and Restoration.

In 2003 he was awarded a CBE in the Queen’s Birthday Honours List for his services to the Arts.

He will return to the West End from 29 August in Deathtrap at the Noel Coward Theatre, the 1978 Ira Levin thriller which was made into a film starring Michael Caine and Christopher Reeve. Russell Beale will play the Michael Caine character, Sydney Bruhl.