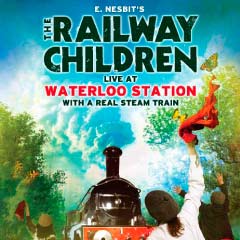 Marshall Lancaster, well known for playing DC Chris Skelton in BBC dramas Ashes to Ashes and Life on Mars, and Caroline Harker, WPC Hazel Wallace in A Touch of Frost, are to star in an exciting new adaptation of E. Nesbit’s much-loved novel The Railway Children.

In a venue within the former Eurostar terminal at Waterloo station, Mike Kenny’s new production will start previews from 4 July and is booking until September. A specially built auditorium at Waterloo will feature seating either side of the original railway track, and makes use of the old Gentleman’s saloon carriage from the original classic film plus a period steam train from the National Railway Museum in York.

Marshall Lancaster’s stage credits include Wuthering Heights and The Arbor, and his other TV credits include Boy Meets Girl, Bob Martin, Coronation Street, Holby City, The Lakes and Family Affairs. In addition to her long-running role in A Touch of Frost, Caroline Harker has also appeared in ITV’s Middlemarch, Margaret, Dance to the Music of Time and Moll Flanders.  On stage she has appeared in All Mouth at the Menier Chocolate Factory, Entertaining Angels for Chichester Festival Theatre, Tusk Tusk for the Royal Court and Present Laughter on tour nationally.

The show is directed by Damian Cruden with design by Joanna Scotcher and music by Christopher Madin.

Book tickets to The Railway Children at Waterloo Station

Sean Hughes to star as ‘Mr Perks’ in The Railway Children

Final Extension To Booking For Award-Winning The Railway Children

The Railway Children at Waterloo Station Theatre – Round-up of Reviews

The Railway Children tickets at the Waterloo Station Theatre