Winners of the Evening Standard Theatre Awards announced at the London Palladium.

Winners of the Evening Standard Theatre Awards announced at the London Palladium. 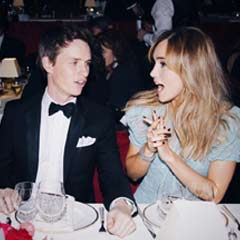 The Evening Standard Theatre Awards were presented tonight, 30 November 2014, at a star-studded ceremony at the London Palladium.

Celebrating the 60th anniversary of the awards, the great and the good of British Theatre (alongside, slightly oddly for the second year, a selection of high-profile figures from British fashion) gathered at the Palladium for the awards, hosted by Steve Coogan and Rob Brydon.

Best Actor and Actress gongs went to Tom Hiddleston for his Donmar performance in Coriolanus and Gillian Anderson for her role in the Young Vic’s A Streetcar Named Desire.

Musical winners of the night were The Scottsboro Boys at the Garrick Theatre, winning Best Musical, and Here Lies Love at the National Theatre, winning the Beyond Theatre Award. The two shows were the only two winners that are currently playing in the West End.

Shortlist of nominees for the Evening Standard Theatre Awards 2014

Past winners and nominees

The Simon And Garfunkel Story