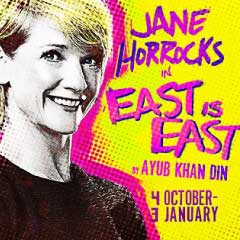 Further casting has been released for the forthcoming production of East is East at the Trafalgar Studios, part of Jamie Lloyd’s second Trafalgar Transformed season.

They join the previously announced stars of the comedy – Jane Horrocks as Ella Khan and Ayub Khan Din – who also wrote East is East – as George Khan.

East is East is Ayub Khan Din’s semi-autobiographical play about his British Asian upbringing in 1970’s Salford and which was turned into a hit British film.

Directed by Sam Yates, the production forms part of Jamie Lloyd’s second season for Trafalgar Transformed following his production of Richard III, which is currently playing at the Trafalgar Studios starring Martin Freeman.

Amit Shah is about to be seen alongside Helen Mirren and Om Puri in The Hundred-Foot Journey, released in cinemas early September. Amit’s stage credits include Hansel and Gretel, The Comedy of Errors, The Hour We Knew Nothing Of Each Other, Odyssey, The Man of Mode, The Alchemist (for which he was awarded the Ian Charleson Commendation for performance), Life of Galileo and The Royal Hunt of The Sun all at The National Theatre, Rough Cuts: The Spiral, Shades, and Free Outgoing all at the Royal Court Theatre, A Christmas Carol at The Rose Theatre Kingston, Arabian Nights at The RSC, King Lear at The Donmar Warehouse, The Hot Zone at The Lyric Hammersmith and Twelfth Night at The Albery Theatre. Amit’s screen credits include The Smoke, Bluestone 42, Cops In Paris, Fresh Meat, White Van Man, Black Mirror – National Anthem, Whites, Hustle, Ingenious, Casualty, Benidorm III, The Palace, Honest, Lead Balloon, The Listener, Howl, All Stars 3D, The Facility, The Infidel and It’s a Wonderful Afterlife.

Darren Kuppan’s stage credits include East is East at the Birmingham Repertory Theatre, Rafta Rafta at the Bolton Octagon and the New Vic Theatre, Stoke, the latter of which he also performed in Arabian Nights, An August Bank Holiday Lark at the Northern Broadsides, Melody Loses Her Mojo at the Liverpool Playhouse, England Street at the Oxford Playhouse, The Bridge at Freedom Studios, Jamaica House at Duke’s Playhouse, Lancaster, Much Ado About Nothing at the RSC, Bollywood Jane at the West Yorkshire Playhouse and Pretend You Have Big Buildings at the Royal Exchange Theatre, Manchester. Darren’s screen credits include Spooks, Britannia High, Emmerdale, Coronation Street, The Sweet Stall, Piggy, The Code, Winners And Losers and The Chaos Theory.

Nathan Clarke’s stage credits include Pigeons at the Royal Court Theatre, Privacy at the Donmar Warehouse, Break the Floorboards at the Watford Palace Theatre, Upstairs/Vibrant Festival at the Finborough Theatre and Small Fish Big Cheese at the Unicorn Theatre. His screen work includes The Interceptor, We Still Kill The Old Way, Perfume, Harry Potter & The Half Blood Prince and Harry Potter & The Order of the Phoenix.

Taj Atwal’s stage credits include All Our Daughters at The New Vic and also on a UK Tour, Small Fish Big Cheese at The Unicorn Theatre, Don Juan in Love and The Wind in The Willows both at The Scoop Air Theatre. Taj’s screen credits include Stabat Mater, Puja Nights, Behind the Green Curtain, In With the Flynns, Miranda, Stella, Kitchen Chic, Moving On and In The Club.

Michael Karim’s stage credits include Skane at Hampstead Theatre and Mogadishu at the Manchester Royal Exchange/The Lyric Hammersmith. Michael’s screen credits include Lewis, Ten Minute Tales – Three Kings, Parents of the Band, The Beat Beneath my Feet, and Truant.