Andrew Lloyd Webber’s Cats and Evita to return to London

Andrew Lloyd Webber’s musicals CATS and EVITA are to return to the West End this year.

Two of Andrew Lloyd Webber’s most successful musicals are both to return to the West End this year, with the UK touring production of Evita coming to the Dominion Theatre in September starring Marti Pellow, and Cats coming to the London Palladium this Christmas.

Cats at the London Palladium

One of the West End and Broadway’s longest-running shows is to return to London this Christmas as Andrew Lloyd Webber’s CATS comes to the London Palladium for 12 weeks.

Based on Old Possum’s Book of Practical Cats by T. S. Eliot, the original show was directed by Trevor Nunn, choreographed by Gillian Lynne and designed by John Napier. Chrissie Cartwright, long term Associate Director of Cats, will work with Trevor Nunn and Gillian Lynne in re-directing the production for the London Palladium.

The show premiered at the New London Theatre in 1981 and played for 21 years in the West End – over 9,000 performances! – and scooped Olivier and Evening Standard Best Musical awards. The Broadway production won 7 Tonys.

Cats has been produced in over 26 countries and is currently touring the UK and Europe.

Expect Elaine Paige, who starred in the original show and became an overnight success in the role of Grizabella singing the hit song “Memory”, to be at the opening night!

The next big show on at the London Palladium is Michael Flatley’s new dance epic Lord of the Dance: Dangerous Games. Also a number of comedians and musicians will be playing the Palladium over the next year including John Barrowman on 24 May 2015.

Evita at the Dominion Theatre

Andrew Lloyd Webber and Tim Rice’s classic musical Evita is to return to London this September.

Evita, which has been touring the UK, will open at the Dominion Theatre from 16 September 2014, for a strictly limited run until 1 November 2014.

Evita features many of Rice and Lloyd Webber’s biggest songs including Don’t Cry For Me Argentina, On This Night Of A Thousand Stars, Another Suitcase In Another Hall, Oh What A Circus and many more.

The musical is directed by Bob Tomson and Bill Kenwright. 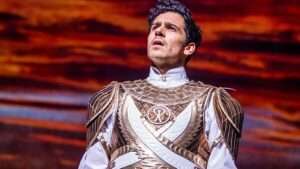 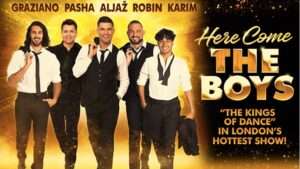