New York audiences will get to see the fabulous Brixton Clubhouse production of Taboo – for 2 nights only! 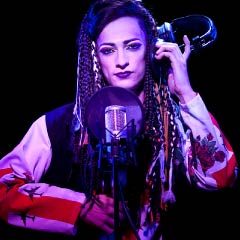 The memorable Brixton production of Boy George’s musical Taboo, based on his life and music, is to get a concert version in New York.

It has been ten years since the show closed on Broadway, and the two night special run at 54 BELOW on 7 and 8 February 2014 will be in support of Broadway Cares/Equity Fights AIDS.

The 2012 production at Brixton Clubhouse played a long run and two stars of the Brixton production – Matthew Rowland as Boy George and Samuel Buttery as Leigh Bowery – will be heading to Broadway to perform in the concert.

They will be joined by Jeremy Kushnier as Philip Sallon. The concert will also reunite Taboo’s original Broadway stars including Sarah Uriarte Berry as Nicola, Jeffrey Carlson as Marilyn, Liz McCartney as Big Sue and Cary Shields as Marcus.

The other star of the Brixton production, Alistair Brammer, will shortly be starring as Chris in Cameron Mackintosh’s new production of Miss Saigon at the Prince Edward Theatre in London.