Despite Nick Curtis’s rather sensational headline in Friday’s Evening Standard, “Cameron Mackintosh: Why I am determined that a theatre of mine will never collapse”, Mackintosh didn’t dig the knife into Nica Burns but offered some tough love. 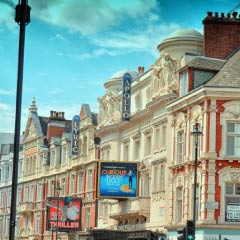 The business of owning West End theatres is a complicated one, and theatre owner and producer Cameron Mackintosh’s take on the honour (for it is an honour) is that it’s a game for the rich, the passionate and the brave.

He sensibly gives Nica Burns, CEO of Nimax Theatres and the owner of the Apollo Theatre, a wide birth and heartfelt tribute, despite Nick Curtis’s headline. Burns owns the theatre which saw plaster from its roof collapse on to theatregoers in December during a production of the National Theatre’s The Curious Incident of the Dog in the Night-Time. Prudent of Mackintosh to go easy on her given that his theatre, the Gielgud, has been chosen by the National Theatre as the new home for Curious, following their decision to abandon the Apollo as a venue for the show citing economic factors.

Nica Burns was said to be “blindsided” by the decision, as may she might. There’s clearly not much room for loyalty between theatre producers and owners in the West End, even when subsidised theatres are part of the mix.

Running West End theatres is a business after all, although one reserved for rich impresarios according to Mackintosh, who has no time for people who take their eye off the ball (on Andrew Lloyd Webber: “for many years, his passion was paintings and that’s where he was spending his money”), or for companies like Ambassador Theatre Group who sell to private equity rather than run theatres as producer-managers (“All these theatres were built for private entrepreneurs… and that’s where they belong, rather than with hedge funds”.)

The upshot of all this seems to be that you don’t make as much money from owning theatres as you do from producing successful hit shows, which is kind of obvious really. The venue is there to serve the play within it. Effectively the show subsidises the venue, particularly when the venue happens to be ageing, historic buildings that are part of our national heritage.

Mackintosh and Lloyd Webber should be celebrated without question for using some of their hard-earned producer profits to shore up a selection of our historic West End theatres, theatres that are old and in need of continual attention and restoration. Mackintosh particularly has proved that with enormous passion and careful use of money (albeit quite a lot of it) these venues are actually fit for purpose – or can be made to be.

Mackintosh is against Lloyd Webber’s idea of West End theatres gaining charitable status, and it would be wholly wrong for the buildings to become some kind of odd National trust heritage site (or worse, demolished altogether).

But it’s time to face some hard facts. The buildings are getting older and older. If the National can exist in the parallel worlds of being subsidised by the tax payer but also aggressively commercial, then why can’t physical West End theatre buildings also live some kind of duel existence between the commercial and the subsidised, whether from charity or government?

It also seems time for the Society of London Theatre to be more proactive and get its members organised around this issue. There is no one body better placed to lobby, fund-raise or champion than SOLT.

A good start would be SOLT members Mackintosh and Lloyd Webber, who happen to be the two most successful British theatre producers of all time. Whilst these two men can’t save every theatre in the West End and have already done much, wouldn’t it be extraordinary if they would consider kicking off some kind of endowment or foundation to help all West End theatre buildings remain operational, beautiful and above all, safe?

SOLT members Rosemary Squire and Howard Panter, joint chiefs of ATG, the largest theatre group in the West End, and The Stage newspaper’s most powerful people in British theatre for the fifth year running, are also uniquely placed to champion and support an initiative.

The West End has always been a wholly commercial place and long may the rivalry continue! But the roof collapse at the Apollo damages the entire West End brand, not just the Apollo Theatre or Nimax brand. It’s in the whole of the West End Theatre industry’s interest to sort this out.